At the weekend I went to the last big University of Leicester event that me and my friends will be going to before we graduate. The Summer Ball is put on by Leicester Students’ Union, and I have to say that I had a really enjoyable time! The deal is that you buy a wristband (this year it was £20/25) and that gets you into the Shabang at the O2 on Friday night, all the day events on the Saturday, and then the Summer Ball on the Saturday night.

This year the tickets were very reasonably priced, although it meant that the Union had had to cut back on asking big acts to take part (apparently they can ask for around £10,000 for a performance). I personally was glad that this choice was made because my favourite part of any night out is usually the gathering beforehand, so it was nice to not have to rush to see any of the acts. It was lovely to see everyone together and all dressed up, and there was a good atmosphere because everyone was looking forward to the night and enjoying seeing each other because of the awareness of it being close to the end.

We arrived at about 1am to a short queue and then headed inside. There were clearly lots of people there but because the whole Union had been opened up it didn’t feel claustrophobic, which is what I’d been a bit worried about. We headed into Queens Hall first, now decked out with green lights- it was weird to be dancing in a place where only a couple of weeks ago people were sat in enforced silence because it was an exam room! One of my friends soon decided they were hungry, so we headed to outside the Square to where the food outlets were. There was the choice of nachos with various toppings, noodles, or hog roast, and they all seemed very popular. I can vouch for the hog roast in particular being delicious!

After we’d eaten we headed back into the Square, which had a couple of large screens put up, one playing a Disney film and the other (I think) a horror film. There were chairs and bean bags spread around, the idea being that you rented a pair of headphones and could choose between either channel to listen to. We didn’t get the headphones but were happy to take in the atmosphere as we waited for our friends. I really like the idea of having a film screening because the ball starts at 10pm, so for those who got there at the start and wanted to stay until the end time of 6am it’s a pretty long night! This is a nice area to chill out for a bit and recharge.

The rest of our night was spent in the O2, which again was busy but not horribly so, with lots of music, a bit of dramatic fire, and celebratory confetti. By 4.30 we decided to head home, but when we left the night was still far from over for a lot of people. I also can’t comment on the acts because I think I managed to miss all of them, but apparently at the ball were Sub Focus, Tough Love, and Charlie Sloth, if those names mean anything to you!

Other things that had been on during the day had been inflatables in the Square and funfair rides outside, and the wristband allows you to get a free 1/4 chicken at the Nando’s on Granby Street throughout this week. All in all it was a great weekend and I think the Union did a really good job 🙂 Now it’s all about getting ready to leave… terrifying… If you want to see all the information/pictures of the night, then here are links to the Facebook pages:

Information on the event

Where the pictures can be found once they’re uploaded 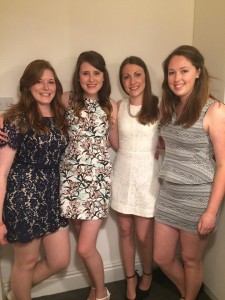