Today in the post I received my tickets for graduation, which means it’s 100% happening! Although each student is allocated 2 tickets for the graduation ceremony you can apply for up to 4, which I was lucky enough to get. So my sisters will be able to come into De Montfort Hall, where the ceremony takes place, rather than having to loiter around outside. The letter that accompanied the tickets began ‘Dear graduand’, which at first I thought had to have been a spelling mistake. However I have now discovered that it is my current identity- someone about to graduate. How exciting! 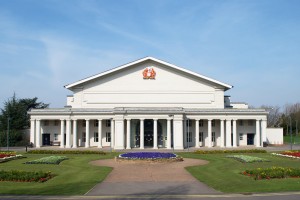 Getting my final result was a bit of a stressful experience, although in principle it didn’t have to be. We got an email from the English administrator saying that the exam board would meet on 26th June and we would receive our final grade within 2 weeks of that date. After about 4 days I got a frantic text from my friend, telling me to check My Student Records, which is where all our official grades go. I logged on and went to my grade section and there it was: First Class. I couldn’t believe it! I mean I really couldn’t- it seemed very odd that my grade would just casually appear on the system without the English department having emailed us about it. I decided to leave it for a few minutes before telling anyone, just to be sure, and when I went back to look again it had gone. The grade had just disappeared!

At that point I had a panic because I was convinced they must have realised they’d given me the wrong grade and taken it back down, but when I messaged some of the other English students they said the same had happened to them. I sent an email to the administrator but had no response- I presume the poor man was inundated by a deluge of frantic emails- and then one bright spark decided to actually phone the department. Apparently there had been some sort of technical error and the grades shouldn’t have been released, but now that it had happened they promised to have the results out before 5.30. Which was wonderful, except that it was about 2 when this information was disseminated! At this point I went on a very stressful dog walk to distract myself and finally, at around 4.30, we got an official email saying that the results were out. And my First was back! Hooray!

I also found out that I’d managed to get a First in every module of final year, which I was so happy about because it makes me feel happier that I’ll be able to cope well with the work at postgraduate level. After that my attention turned to the technicalities of the actual graduation. I’ve measured the circumference of my head and ordered my robes and hat, bought a fancy dress and some heels that I’m hoping I’ll not make a fool out of myself in, and booked a meal for my family and I for after the ceremony. The ceremony itself is this Thursday at 3.30. I’ll be getting there with my family about 12.30 so that I have plenty of time to pick up my gown and sign in, as well as have some photos taken with my friends. Afterwards the English department are going to put on some refreshments. Honestly I can’t believe it’s really going to happen- this is something you think about as the end goal the whole time you’re in education!