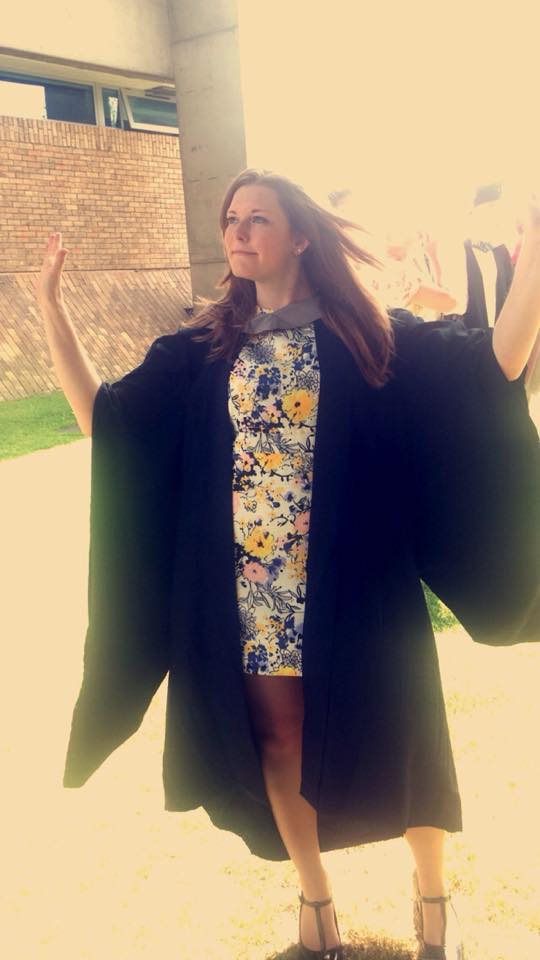 Hello everyone- I graduated! The whole end goal of my time at Leicester, and my entire education really, and I’ve done it! As you can tell from both the quick succession of exclamations and my triumphant pose, I’m  really happy to have completed my degree. Let me tell you about the day…

My ceremony was in the afternoon so the day started bright and early in the suburbs of Manchester, more chaos than calm due to the conflicting demands for the bathroom that ensued between my two sisters and I. The morning ceremony people I know had all opted to book a hotel the night before and I think in retrospect, although it would have been more expensive, if possible it would have been kind of easier to have done that. My family squeezed into our car and then spent the two hour journey attempting not to spear each other with our inappropriate footwear or crumple our dresses. At one point my Dad foolishly opened the window, not realising that all hell would break loose as the three siblings simultaneously screeched “you’re ruining my hair!” I’m just setting the scene so that you can really envisage the fact that tensions were running high…

Once we arrived in Leicester and finally managed to park (the allocated parking was full from the morning’s people) it all actually got a lot more straight-forward. I abandoned my family whilst I went to collect my gown and hat (sorry, mortar board) from Queens Hall. It was definitely akin to a military operation in there! I was sort of sucked in to a process of overwhelming efficiency: give reference number, receive tightly folded parcel of clothing, get dressed in said clothing by smart looking robe official, exit process. And breathe. (The process was so efficient that when I describe it I feel like I have to do it in as few words as possible; goodbye ‘my’ and ‘a’, you are not welcome, we have no time for you). It also turns out that me and mortar boards do not get on- you could go as far as to say we are mortal enemies… I just couldn’t get used to the feeling of it being sat so far forward on my head, and the tassel caused problems too because it was meant to serenely dangle off the left side of the hat but mine kept splaying itself wherever took its fancy.

Despite these seemingly insurmountable obstacles, I managed to battle on and went to get the professional photograph taken. At various times of the day I heard that there were queues of over an hour long but I must have picked a good time because I practically stumbled my way in and had my photo taken without really even fully realising- I think I was in shock about the whole ‘graduation’ thing, and my bewilderment is clear to see in the photo proof, so I can’t wait for that flattering version of me to take pride of place on the mantelpiece… 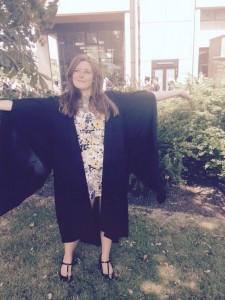 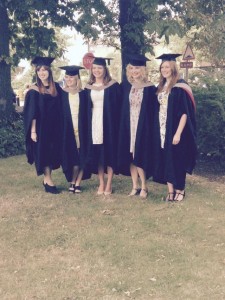 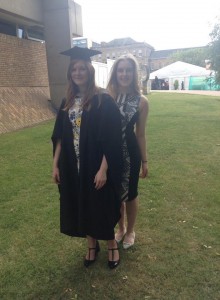 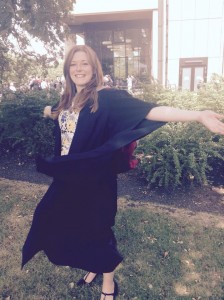 After that there was a bit of an anti-climatic wait because the ceremony didn’t start until 3. I found my friends and we had our photos taken together and it was really lovely to see everyone dressed up and all celebrating. Luckily the weather was nice as well, thank you kind fates, so there was a lot of milling around outside at this point. Then we headed over to De Montfort Hall and I separated from my ‘guests’ to go into the ‘graduand’ entrance and I finally got to see the inside of the Hall. It’s beautiful! The English lot were seated toward the front of the Hall and I ended up on the row just before the stage, so that was an extra piece of luck. I was a bit worried that the ceremony was going to drag, but actually it was honestly just very nice. The orchestra were great, the students going up went quickly and no one fell over and everyone seemed really happy, and the honorary graduate was inspiring. The whole thing lasted just over one and a half hours, and my only tip would be to bring water in with you because it got pretty hot. Everything else was perfect. 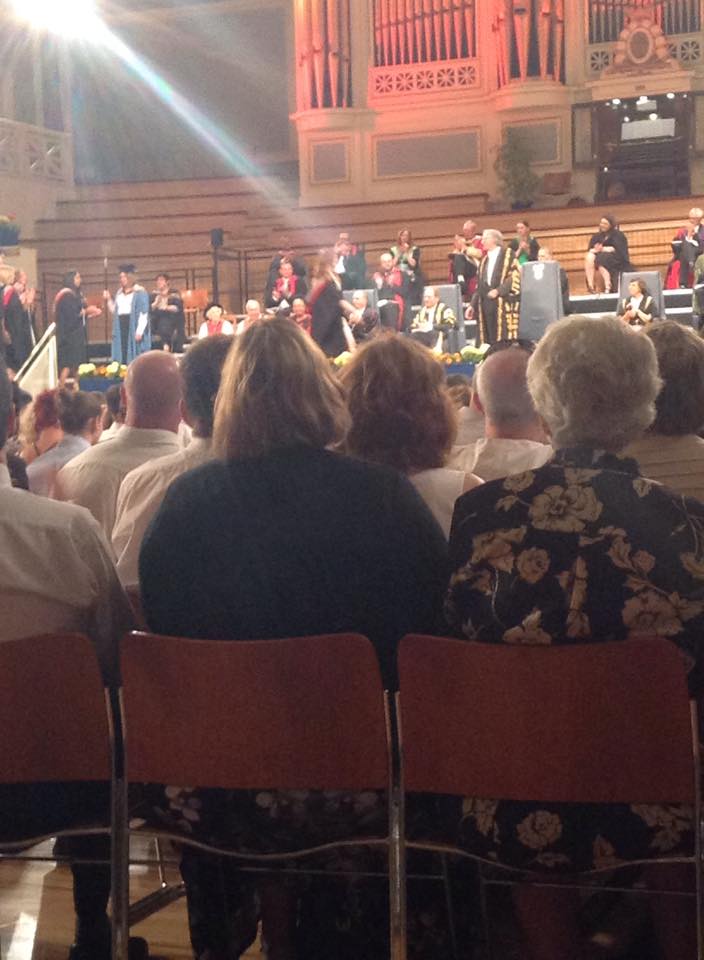 After that there was a reception for the different subjects in a marquee. There was ‘finger food’ and Pimms etc and more time to see the other students. The only thing that I thought was a bit of a shame was that I only saw one of my lecturers there- it would have been nice to say bye and thank you to some of the others (although I’m staying on to do an MA so they aren’t rid of me just yet). At this point I’d sort of had enough, just because it was a long day filled with a lot of different emotions. I was so happy to see my friends and to actually graduate, but then I was sad it was all officially over, and getting timings right and co-ordinating everyone and everything was pretty stressful. So at that point I snuck off with my family and we went off to have an early tea and head home.

And that was my graduation 🙂 I guess that’s that from me really, my time as an undergraduate blogger is nearly up! I’ll do one last post to say goodbye and hand you over to our next English blogger, and then that’ll be that. Eek!