I have been part of a dance group since the age of 4, when I turned 18 I decided to give it up due to moving away for uni and exam commitments. I didn’t join a society in first year and I really regretted it, second year I joined hockey but as a sport it just wasn’t for me (it made me realise I literally cannot play competitive team sports). I thought at the start of third year I’d go back to doing dance, I am an incredibly shy person so the thought of attending a taster session on my own was absolutely terrifying, but I managed to get through it.

The first few weeks were definitely daunting to me, as new members were mostly freshers I felt I didn’t have that advantage and I really struggled to keep up with the dancing aspect of it due to having had 2 years off. However, I really enjoyed the dancing and how challenging it was compared to what I had previously been doing. I remember when the first social came around I was so nervous as none of the girls I’d been speaking to regularly in class were attending so I went back and forth on whether to go or not. I pretty much dragged myself there because I knew it wasn’t going to be that scary and once I’d got there, had a few drinks I’d feel fine. I was right, it didn’t take long for me to settle in and the social was so much fun and everyone was so friendly. The only problem with the night was I was a bit too drunk, a personal error of course. Now I think I have attended and loved all but one social.

Flash forward a few months and I can honestly say my only regret with this society is that I didn’t join it in first or second year, I’ve loved every aspect of it, from the classes to the socials and most importantly the comps. We competed at Nottingham Trent’s dance competition and I can honestly say I have never felt more at ease on stage. Like I previously said, I am really shy but dancing at Nottingham made me feel so confident it is unreal, it felt so good to be part of an amazing group and to get an amazing reaction from the audience. We came away with 6 awards, which was an amazing feeling. Unfortunately our second competition of the year Sheffield was cancelled due to the recent weather conditions but we have our Showcase coming up on the 20th March and I am really excited to perform at that too. 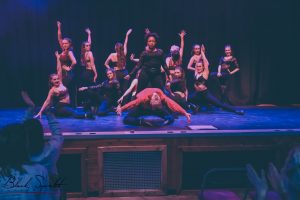 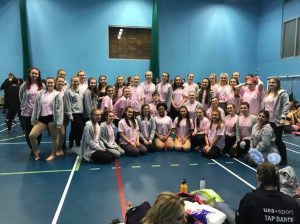 I’d say overall joining Modern Dance society has done wonders for my confidence in so many ways, I owe this society a lot and I will be so sad to leave uni this year knowing I will be leaving such a great group of people after having spent only one year with them. If you’re joining uni in September, or are thinking of joining a society in second or third year, I would firstly 100% recommend Modern Dance (they are so welcoming and friendly) even if you’re a complete beginner and secondly I would urge you to just do it, as it makes such an amazing difference to your university social life in so many ways.

Hey everyone! My name's Molly and I’m a final year English student. Read my blog to follow me on my journey through third year at the University of Leicester. You can expect blog posts on University life, social life and my course as well as plenty of tips on how to make the most of life at Leicester!