During the ReFreshers period, I attended the Societies Fair and signed up to several societies that I thought I might try out. I hadn’t really explored the societies aspect of university, during first year, since I’d spent a lot of my time working part-time. However, I’d decided that I wanted to dip a tentative toe into the water, and I dived in to LUTheatre society, not quite sure what to expect.

It was one of the best decisions that I’d made at UoL. Feeling buoyed by how friendly everyone had been at the auditions for the Spring Term’s plays, I was over the moon when I was asked for a callback for The History Boys, where I realised that acting was something that I enjoyed immensely, and I enjoyed it even more so when interacting with the other society members. I was over the moon when I was offered the part of Timms in the play, and I couldn’t wait for rehearsals to begin.

Not only were the weekly rehearsals something that I used to relax, outside of my degree, but I’ve also met so many amazing, interesting people there, who quickly became good friends. It was such a fun play to be a part of, and I loved every single second, from the readthrough, to the warm-ups, to the singing lessons and even the dancing lessons! 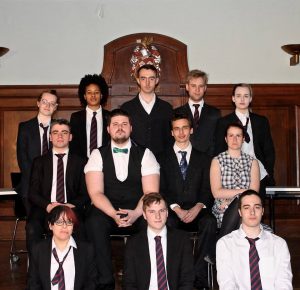 Two months later, when the three nights of performances were finally upon us, I was gutted that I would have to say goodbye to my character and cast, but the shows were so fantastic and so much fun that it more than made up for it. The adrenaline and camaraderie between the cast and crew was awesome, and I got such a rush from performing in front of everyone. Our closing night was our most successful, with a terrifyingly large audience of 78! But it was so rewarding, after all the hard work that everyone had put into this production. 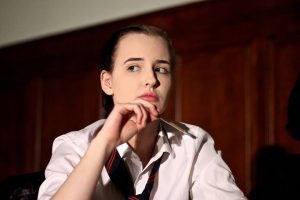 I am so thankful for having joined LUTheatre, and I am so relieved that I managed to pluck up the courage to join, when I did. It was incredibly nerve-wracking, but it has been so much fun, and I can’t wait for the future opportunities that it may hold. As someone who was previously lacklustre about societies, I would really encourage you to keep your mind open and give something a try, if it interests you – you never know where a choice may lead!