Hello, everyone! The day (or should I say night) is finally here: Christmas Eve! I hope you all have a wonderful evening tonight, and an awesome day tomorrow, whoever you’re spending it with! I know I’ll be all curled up on the sofa, with some chocolate and the Nightmare Before Christmas, later on, to […]

This week, a lot of university students received confirmation about their study abroad applications: I was excited to hear from my American Studies friends about where they would be going, next year, in America. I’ll admit that I was a teeny bit jealous when I heard about all the amazing places that they would be going to: Arizona, Oregan, […]

With it getting darker so much earlier in the evening, and the days getting colder and colder, I thought it was time for a feel-good post to get you in the warm, festive spirit! Christmas isn’t far away, where there’s the satisfied glow of being inside in the heat, protected from the miserable Winter […] 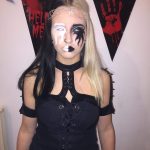 Last week, it was my absolute favourite festivity of the whole year: Halloween. As a gal with a love of alternative fashions and creepy things generally, I always get excited about the 31st of October. And not only do I get to indulge in all things sinister, scary and spooky, there is an additional […]

Warning: No graphic descriptions, but I will be describing the process of donating blood.   This is a bit of a weird, niche blog post, this time around. A lot of my fellow bloggers have written some awesome posts about starting university, settling in and Freshers’ Week – they’re really interesting and entertaining, so go […]

Injecting Passion into Your Personal Statement

The dreaded time is coming around. Soon, universities will be accepting applications and that means that UCAS will be a big part of people’s lives until January. And UCAS is synonymous with… the personal statement. This is a fairly big deciding factor for universities (as well as predicted grades), when choosing to accept candidates, […]