One of the reasons why I love studying contemporary literature is because quite often a connection to the authors and works are tangible- the author is still alive, or people are who know/knew the author, the works often talk about things that either you know about or can learn about through asking parents/grandparents, there are […] 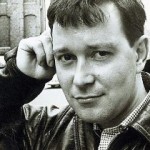