This post isn’t particularly in keeping with the latest fresher news but it’s been a while since i’ve been so excited over a new film release. The film in question is ‘Godzilla’, directed by Gareth Edwards to be released in May 2014. Most are aware of the story of a giant radioactively mutated lizard running rampant amongst a heavily populated city, destroying everything in its wake; a film that screams insipid hollywood blockbuster relying heavily on a mega-budget fuelled CGI spectacle with little else to offer. Most would have seen Roland Emmerich’s 1998 version starring Matthew Broderick and Jean Reno – a film that’s definitely enjoyable but feels rather predictable without providing any real character depth. After watching the teaser trailer for the story’s latest incarnation, I believe that it might be a perfect example of how almost any film can be fantastic provided it is placed in the right hands.

The capable hands that I refer to belong to Gareth Edwards, the man behind the 2010 dystopian film ‘Monsters’ which was visually stunning thanks to Edwards’ expertise in visual effects. He also shot the film on a low budget entirely on location in places where permission wasn’t always granted, using local people that happened to be around at the time. Such an unorthodox approach is something that a story like Godzilla would benefit from heavily. Edwards had the dystopian aesthetic down to a T in ‘Monsters’ and the same can already be said for Godzilla, judging by the exquisitely detailed shots of the aftermath caused by the giant lizard in question. Edwards isn’t the type to shy away from making a film that doesn’t tick every box on the audience demographic; in the trailer we get a bird’s-eye view of  hundreds of dead bodies amongst the wreckage, foreboding a particularly gritty take on the classic disaster story with no intention of being family friendly. The trailer also features the famous ‘Now I am Become Death’ speech from J.Robert Oppenheimer, providing a chilling accompaniment to the scenes of destruction as well as tying in with Godzilla’s links to nuclear power and destruction.

The film will star Bryan Cranston, who after his performance in Breaking Bad can probably have any role he so well pleases, but Cranston has always been a phenomenal actor in any role he’s taken on so news of his involvement is very exciting. Added bonuses in the cast include Aaron Taylor-Johnson (of ‘Kickass’ fame), Ken Watanabe and Elizabeth Olsen.

Although we’ll have to wait just over six months for the release, I’m incredibly excited about this film. I might’ve become hypnotised by a very impressive trailer, but I think the film has potential to be one of the best disaster movies made in a very long time mainly because of who’s involved. Plus EVERYONE likes Godzilla, it’s a story that has been soldified in worldwide pop culture ever since we first saw the giant lizard in Ishiro Honda’s 1954 film.

I’d post the trailer on here but it’s being swiftly taken down everywhere it is posted – do some googling and hopefully you’ll find it, you WILL be impressed. 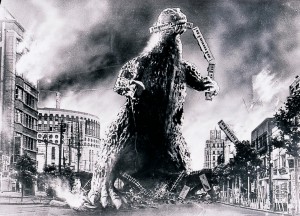