What do Game of Thrones, Rambo, Star Wars and Sherlock have in common?

I only know one thing for sure: I have visited their shooting locations!

In a few weeks I’m going to Croatia for vacation and it brings back the memory of how I visited King’s Landing (aka Dubrovnik) for the first time when, sadly, I hadn’t yet known anything about Game of Thrones. It was similar to the case of Rambo, too. Several years ago, I visited a small town in Canada called Hope, which I found absolutely staggering with its fascinating mountains. However, it was only recently that I discovered that this place was where Rambo: First Blood had been made. Pretty annoying… I mean, it’s more fun to embrace the spirit of a film location if you’re actually aware of that you’re at a film location. Obviously.

Also frustrating to think back of how I haven’t appreciated an opportunity to wander on the area of a famous scene. This happened with Star Wars: me and my family were on vacation in the desert in Tunesia, where our travel guide told us that Anakin’s race from the Phantom Menace had taken place there. Sadly, at that time, I couldn’t care less… In my defense though, I was about 8 years old. Now if I had the chance, it would be different! At least I would take dozens of photos…

Due to these (missed) experiences, lately I’ve been trying to be conscious about where my favourite movies take place and which ones I have the opportunity to visit. For example a few months ago I went to London with a friend who is -luckily- similarly obsessed with BBC’s Sherlock as I am, so it was evident that our programme included visiting the real Baker Street and the fake Baker Street, as well (that is, North Gower Street, which appears as Baker Street in the series.) 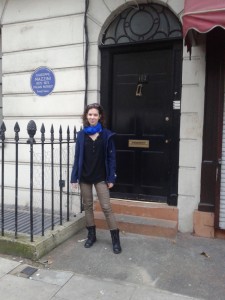 Me, standing on the same spot where Sherlock and Watson step in and out of 221B in the series

Okay, so maybe these things are not too important. But… who am I kidding, these are important to me, as I’m a bit of a nerd. There’s just something so exciting about experiencing a certain place in real life that you have already seen on screen before, and imagining your favourite actors working there!

By now, I have a precise list of what places I would like to see. The best one -which is also the hardest one to accomplish- is New Zealand, because of Lord of the Rings. I don’t need much explanation here, do I?