The Good, the Bad and the Genius

Posted by Erika in Film Studies on September 3, 2015

Have you ever heard of the legendary Italian composer, Ennio Morricone? If not (and also, if yes) then let me tell you a bit about him as I have already been to his concert and now I’ve just found out that he is going on tour again. A few months ago, in his “50 Years of Music” concert he conducted the most famous film music pieces in 2 hours and I would absolutely love to re-live that experience!

Okay, first things first: when it comes to film, one of my favourite genres is western. Concretely, the so called “spaghetti western”, such as Once upon a time in the West. But to be honest, I mostly prefer the ones with Clint Eastwood… You know, like the Dollar-trilogy which I have already seen probably a hundred times and am about to see a hundred times more: A fistful of dollars/For a few dollars more/The good, the bad and the ugly. I could write about these films for hours but right now the point I’m trying to make is that these films’ famous, iconic music pieces were all composed by Ennio Morricone. And I’m pretty sure that without his music, many films wouldn’t be as successful as they are with it. (It is quite common to forget about the significance of the soundtrack’s role in a film, don’t you think?)

Imagine listening to this live! It’s a lifelong experience.

But it’s not all about the westerns; his list of works include The Professional, The Untouchables, The Mission or Once upon a time in America, just to mention a few. As a composer, his resume involves hunreds of work altogether and he is still active to this day – he will be 87 this November! Impressive, isn’t it? Apart from going on tour and conducting his concerts he is still writing music for films. I have read that Quentin Tarantino -among others- is a great admirer of him and apparently his new movie, The Hateful Eight will have Morricone as a composer as well. I can’t wait to see this film! I mean: western, Tarantino, Morricone? Yes please.

I personally don’t only admire Morricone because of his great talent but because of his… well, if I say personality, that sounds a bit weird, right? Still, I really like how humble and dedicated he is. It’s just something that came through from his concerts, from his interviews and simply from his whole career. Despite being offered a villa in Hollywood, he never moved there but stayed in his homecountry, Italy and composed music for numerous Italian films rather than just working on American blockbusters. 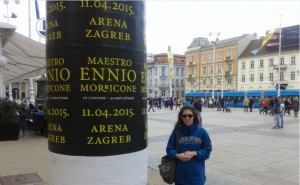 Me in Zagreb, the day after his concert

In 2007, Morricone was awarded with an honorary Oscar and I was so happy about it, he has earned this acknowledgement so much! Also, I love the fact that in the video of his acceptance speech he is speaking Italian the entire time and Clint Eastwood is translating to the audience.

Morricone’s tour has one station this September in Verona and then it is continued in January; it will take place in several European countries. I could go either in Budapest in January or in London in February. It only depends on my exam timetable and on money issues… But if I’m determined enough, I will manage it!