Posted by Erika in Film Studies on October 3, 2015

The past week has been so hectic (I got back to England and moved in to my new flat but none of these things went smoothly) that I decided not reflect on it – not yet anyway. Instead, I thought I’d share my recent movie marathon experience with you.

It was at an event called Night of the Cinemas, in September, where different movies were screened constantly in 6 different rooms. This way we could decide which ones to watch and in what order. We were watching films from 6 pm to 6 am but due to the huge crowd, we sometimes had to fight to get to see a film. (In fact, this was the first time when I was forced to sit in the first row of a cinema since the only free seats were there. I hated sitting there, as simple as that.) Anyway, because of the wide selection of the movie types that we could watch (a comedy, then an action movie, followed by a thriller etc), I felt quite awake during the whole time. Okay, there was one point where I felt like my brain was struggling a bit to catch up with the film as the waves of tiredness hit me, but it was quite all right. I had had way harder marathons than this recent one, to be honest. For example, one of the toughest was a Lord of the Rings-night, when we watched all three movies in a row (extended versions of course), from 7 pm to 8 am. And we had a class right after that, from 9 am that day… You can imagine how productive I was. Actually, thinking back to this memory, I kind of doubt my sanity.

So during this Night of the Cinemas the film that I liked the most was a Spanish thriller, called La Isla Mínima (Marshland). The basic story very briefly, without any spoilers: two detectives – who have some difficulties working together – are trying to catch a serial killer, whose victims are young girls. It was really exciting! Also creepy and masterful at enhancing the suspense. The colours were stunning, too: pale colours, mostly various versions of yellow and brown were used. It was absolutely efficient in expressing the desolation, dirt and desperation. You know that feeling when the mood of a film makes you squirm in your place? It was exactly like that. I do recommend it! 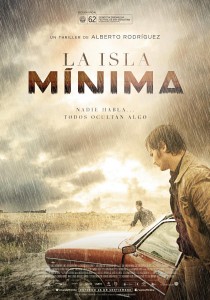 I love having marathons from time to time; you constantly jump from one world in to the other, and when it’s over, you’re overwhelmed with the movies that you have watched as they hit you all at once. I plan to have my own little marathons here, at Leicester, too (though NOT on school days, not anymore). However, first, I think it is time for me to visit a cinema again; a really great one in Leicester is the Showcase, which you find in the city centre, in Highcross. It has some pretty good offers nowadays (The Intern, The Martian etc), so I got to go!