The thing is, not only do I enjoy travelling but every now and then I simply need to get away from the place where I otherwise spend most of my time. So even if it is just a one day trip to somewhere in the country, sometimes it is definitely good to lose touch with everyday life in Leicester. (Especially since I’m not from the UK and can’t just go home for the weekend anytime midterm.)

Some of the trips I most liked so far include Sheffield, Nottingham and Birmingham and a town called Mablethorpe. I have never heard of it before, but I wanted to go to the east seashore, and it looked good on the map. Of course the weather was nothing beach-like, but still, the presence of the water always makes me relaxed. As for Birmingham, I went there for the first time about two weeks ago but since then I have been there two more times; once because I was a chaperone for ELTU students who made a trip to Birmingham and once to visit the famous Christmas Market there. Warning: never ever go to a Christmas Market if you are starving. Unless if you’re rich… 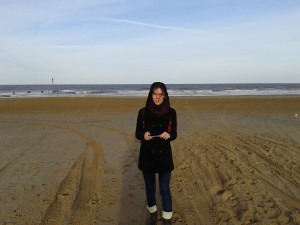 And of course, London. Sure, London is way too big with too many tourist attractions for a person to see everything in one day. So, several one-days have to be made. I already have the next one scheduled in December, for a Christmassy-London. That reminds me, I will have to watch Love Actually before this trip, just to set the mood… Anyway, I already have some great experience regarding London, such as seeing Sean Bean live, in Camden (I almost died, because what were odds? Plus, he is one of my absolute favourite actors) or getting on the London Eye after just about 5 (!) minutes of queuing.

Contemplating the view from the London Eye

I love how Leicester is situated basically in the middle of England, within reasonable reach of the main big cities. (Manchester and Liverpool still need to be crossed off my list.) Sometimes I just point at something on the map, research the main tourist attractions in advance on the net and just go there. And then I usually get lost, but that’s okay, because at least this way I end up wandering in the streets and getting the true feeling of the city. It’s real fun! In fact, these kinds of trips are the only things for which I am willing to wake up at 7 at the weekend…