Well, maybe that’s an exaggeration. I didn’t actually see Kevin Bacon, but I did see 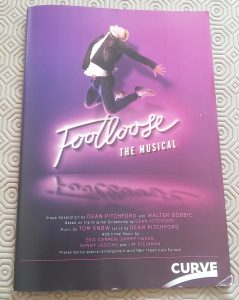 one of the best characters he’s ever played (in my opinion) brought to life on the Curve’s stage in a live production of Footloose.

The original Footloose movie was released in 1984, and told the story of city teenager Ren McCormack (Kevin Bacon), who moves to a small town in which rock music and dancing have been banned. It proved to be a hugely popular film, with an even more popular soundtrack. Due to its reputation, Footloose became a Broadway musical in 1998, and has travelled all over the world ever since.

Theatre trips have always been a special thing for my sister, my mum and I to do together, and since we’re all such massive 80s movie fans, we figured we’d give Footloose a go. And thank God we did. It had plenty of character, and the musical numbers were amazing. However, (isn’t there always a however?) we turned up expecting to see Gareth Gates in the role of Ren’s gormless yet incredibly loveable friend Willard, only to be slightly confused when we instead came face to face with 911’s Lee Brennan. Of course, with our luck, we’d managed to book the one date that Gareth Gates wasn’t doing. But, worry not, our day out was not ruined by this, because I would go as far as to say that (here comes an unpopular opinion) Lee Brennan was better in the role of Willard than original movie cast member Chris Penn. Shhh, never tell anyone I said that. Brennan gave such an effortless and inviting performance that it was virtually impossible to pine for the talents of Gareth Gates, and, dare I say it, he even stole the limelight from the brilliant Luke Baker, who was playing main man Ren. Overall, if you’re ever given the chance to see this show, take it. It’s a light-hearted 80s throwback, with just a hint of nudity (who knew 90s pop sensations would look that good in gold pants?). 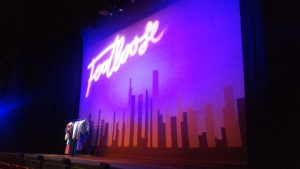 I must just say a word about the Curve before I finish up. They always put on the best shows, they have the loveliest staff and you are pretty much guaranteed to have an excellent time whenever you go. The only heads up I’ll give is that it gets pretty chaotic getting out of the carpark straight after a show ends. Wait a while, have a coffee, meet the cast of the show you just saw, and then leave. No traffic jams for you.

So, if you ever need a change from the pub, or if you’re studying a drama degree, or if you think you’ve exhausted everything there is to do in this city, go to the Curve. You never know what brilliant show you might stumble upon. You might even see Gareth Gates.