Hooray! Halloween is just around the corner! And with that in mind, it’s only right that I, a film student, should celebrate this occasion by doing a ‘Top 4’ of my favourite scary movies. Enjoy!

I can’t imagine there’s too many people alive today who haven’t heard the iconic prom scene in this adaptation of Stephen King’s novel. Yes, it was the 70s, so the special effects weren’t up to too much (basically, you can tell that’s not pig’s blood all over Sissy Spacek’s hair) but the whole film is still rather chilling nonetheless. 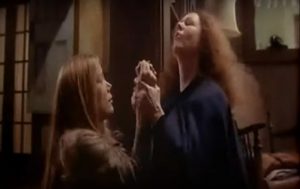 The story revolves around a shy teen named, you guessed it, Carrie. Mercilessly bullied by her fellow pupils, she discovers she has telekinetic powers. Chaos ensues. Throw in Piper Laurie as Carrie’s domineering, religious mother, and you’ve got a sure-fire horror hit.

This film is definitely not for the squeamish, but then, what horror film is? If you love a cheesy teen movie, but love supernatural bloodshed a whole lot more, then give Carrie a watch. And hey, if you can’t stick ‘terrible old movies’, 2013’s version, with Chloe Moretz in the eponymous role, wasn’t too shabby, thanks to the fabulous Julianne Moore.

I love 80s films. And I love the legend that was Wes Craven (may he rest in peace). So imagine my feelings towards an 80s film directed by Wes Craven. Not only is A Nightmare on Elm Street arguably one of the most iconic horror films of all time, but it kick-started Johnny Depp’s career and made him the household name that he is today. And, much like Carrie, it’s one of the most eerie films I’ve ever seen.

Centring around of a group of teens, A Nightmare on Elm Street follows a serial killer who… kills his victims in their dreams. Odd, I know. Odd but completely innovative and completely fantastic. Said serial killer is the notorious Freddy Kreuger, who may just pip Darth Vader to the post and take the title of my favourite villain of all time. Maybe it’s because he’s more comical than villainous, who knows, who cares, he still messed up my sleeping pattern for a good two weeks after I saw this film, for fear that I would die in my sleep.

A Nightmare on Elm Street is a must for any horror fan; there’s a reason it’s spawned several sequels and remakes. This is 80s movie-making at its best, and it also helped to revolutionise the ‘slasher’ genre, along with Halloween and Friday the 13th. Give it a watch. Scare yourself. See whether you think Freddy Kreuger is terrifying or hilarious. Or hilariously terrifying.

So there’s number 3 and 4 of my iconic horror movie run-down… Stay tuned for part 2!