So… This post is going to function as a sort of follow on from my last post… Because I’ve rediscovered something about film production that I absolutely despise: editing. Yes, university may have changed my outlook on filming as a whole, but editing is still as tedious and drawn-out as ever. Even more so, in fact, as there’s a whole other layer to editing at degree level that I never had to contend with during A Levels.

It all starts off the same; import all your clips, find the small percentage that are actually useable, pull them onto your timeline and edit to your heart’s content with that fabulous razor tool. And at A Level, you just had to drag in an accompanying soundtrack and voilà, you were done and it was a masterpiece. Not this time around.

It took about four hours to edit no less than three minutes of footage together. And that wasn’t even the hard part. That 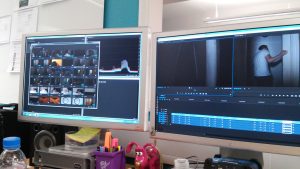 came when we turned our attention to audio. And this is no ‘soundtrack and you’re done’ job, oh no, this is a ‘let’s find two different soundtracks, five SFX’s, heighten the dialogue, make sure the edit matches the beat of the music’ job. And it takes patience.

Not only is the audio a pain, but being the experimentalists we are as a group, we thought it would be a fab idea to put a red tint over half our film, to differentiate the ‘nightmare’ element. Little did we know that this would mean changing the colouring of every single shot in turn. Nightmare indeed.

However, it must be noted that despite all my whining, after seven hours of editing, I couldn’t be more pleased with the outcome. Considering I went into second year absolutely despising the mere idea of making another film after the previous horrors I incurred, I enjoyed this module far more than I thought I would. And honestly, me ending 2016 saying I actually enjoyed making a film seemed more unlikely than us ending 2016 calling Donald Trump the President of the United States. Clearly, miracles (or cataclysms) can happen.