The Christmas season is upon us! 2016 is nearly over! So, this is a perfect time to run down my favourite films of the year, right? Let’s go!

The best way to describe Doctor Strange is to say that its hands-down the most unconventional Marvel movie to date. Yes, it revolves around a man with superhuman abilities, but not in the same way as Iron Man or Thor. Stephen Strange (Benedict Cumberbatch) has no immense strength or angry green alter ego, just a desire to regain his ability to perform his job as a surgeon again after a horrific car accident that left him without the use of his hands. Seeking out the Ancient One (Tilda Swinton) in Nepal, Strange is taken on a mind-bending journey through the other dimensions, facing villains Kaecilius (Mads Mikkelsen) and Dormammu. 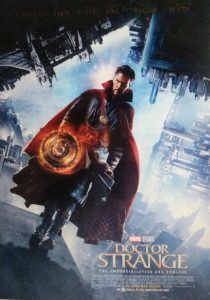 The reason I loved this film so, so much is purely because of how unorthodox it was. If anyone was growing bored with Marvel’s fairly formulaic “here’s a strong white man who’s going to save the world with his super strength”, Doctor Strange will have been the MCU’s saving grace. It wasn’t an entirely easy story to follow, especially when it came down to all the talk of other dimensions, but that’s what made it appealing to me. You had to focus, you had to completely place your mind in the world of the story and let yourself become immersed. After all, films are for entertainment and escapism, right? So why do I feel like we don’t get this from enough films nowadays?

I have to give a quick mention to supporting cast members Chiwetel Ejiofor, Rachel McAdams and Benedict Wong and praise their excellent MCU debuts. Here’s hoping they all return, in one way or another.

In short, if you’re a Marvel fan, don’t miss this. Doctor Strange will almost certainly be joining our existing Avengers for 2018’s Infinity War, so it’ll pay off to get familiar with him now. And even if you’re not a Marvel fan, and just need an escape, Doctor Strange is completely for you. Have fun trying to get your head around Sherlock Holmes with fancy facial hair and a magical cape.

Picture me, sitting in the cinema, hearing Hedwig’s theme again and realising I haven’t breathed since 2011. I grew up with Harry Potter, I remember my heart breaking when the credits closed on Deathly Hallows – Part 2 because I thought we’d never see this magical universe on screen ever again. Boy, was I wrong. 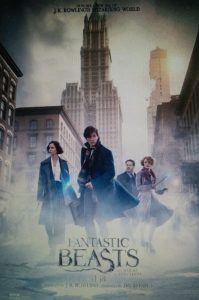 Think of Fantastic Beasts as Harry Potter set in New York. Bumbling British wizard Newt Scamander (Eddie Redmayne) travels across the Atlantic with his magical case of creatures with the intention of releasing one back into its natural habitat. But, of course, this goes horribly wrong and chaos ensues. Add into the mix the mysterious case of dark wizard Gellert Grindelwald (who’s portrayer I won’t reveal for spoiler purposes) and you’ve got the makings of the perfect Harry Potter prequel.

Fantastic Beasts was everything us 20-something Harry Potter fans needed; nostalgia for our old Hogwarts gang, with just the right amount of exposition for our new characters. Eddie Redmayne pitched Newt perfectly; an adorable nerd with a heart of gold (so… he was just playing himself?). Our new American counterparts Tina (Katherine Waterson), Queenie (Alison Sudol) and Jacob (Dan Fogler), plus Colin Farrell’s villainous Percival Graves were unfamiliar yet fresh characters who, despite Newt’s leaving New York at the end of the movie, will hopefully be seen again. Oh, and don’t even get me started on that final twist. I’m still internally screaming.

Even if you didn’t grow up with Harry Potter, I’m imploring you to see this film. Visually, it’s beautiful. Yes, there were a few minor parts where I felt the story could’ve been tied up better, but still, it’s worth seeing this film just to see Ezra Miller not as the Flash.

Could number one really have been anything else? Yes, all Marvel films are visually striking with strong actors, but Civil War was something else. There were fears of an overcrowded cast, a messy story, Steve Rogers’ impending death, but none of this was true. Civil War was a masterclass in how to do a superhero movie right. David Ayer should take note. There’s a reason Suicide Squad didn’t appear on this list.

Okay, the gist of a convoluted story is; after the messy events of Age of Ultron, the US government want the Avengers put under control. Some Avengers agreed to the terms of the Sokovia Accords, some didn’t. Then bring Cap’s wartime buddy Bucky Barnes back into the equation, and things get really chaotic. Loyalties are tested, relationships are broken down, but this is still the most comic Marvel film to date (mostly via Paul Rudd’s Antman, a more than welcome addition to the Avengers). 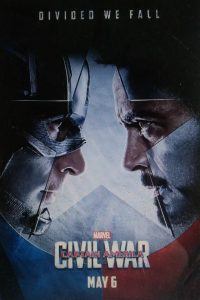 So there’s a huge fight between Iron Man and Cap, blah blah blah, but that’s not what needs to be focused on. Civil War acts as the debut for two new MCU characters, and no expense was spared on this. Chadwick Boseman’s Black Panther was such a hit that he’s already got his own solo film coming in 2018 (not to mention that he has the best character arc in any MCU film ever, but that’s a rant for a different time), and Tom Holland’s Spiderman was everything I dreamt he would be and more. Finally we have a Spiderman who actually looks and acts like the teenager he’s supposed to be, and I can’t wait to see his dynamic with Iron Man furthered in next year’s Homecoming.

If you haven’t seen Civil War yet, what are you doing? Unlike the other two on this list, it’s been out of cinemas for months, you’ve had plenty of time to have your whole life changed by this work of art. You’ll be laughing, you’ll be crying (seriously, when Rhodey fell out of the sky? I was in pieces), what more could you possibly need to entice you?