On Friday 14th July 2017, I graduated from the University of Leicester with a Bachelor’s degree in Modern Languages with Film Studies. After four years, the day I thought would never arrive, finally did.

Graduation is the last day you and your course friends will spend all together. It’s when you realise this that you start to become nostalgic. You start thinking back to the first time you met some of these people. On the first day, you know no one. I remember we had an introductory meeting with the department staff. I sat next to a girl with short hair, and we bonded over our mutual fascination with the Head of School’s suede elbow patches. Her name was Kate. We’ve now been friends for four years. I’m not usually the soppy kind, but Graduation day does that to you.

I remember this time last year I didn’t feel ready to graduate like all my other friends were. So, for me, doing a year abroad gave me that extra time I felt I needed, although sometimes it does feel like you’re a year behind everyone else. While I’ve only just graduated with a Bachelor’s degree, everyone else in my university year has either got a year of work experience under their belt, or are completing their Master’s. However, in the grand scheme of things, one year doesn’t really matter. We’ll all get somewhere in the end, so it doesn’t matter how long it takes.

The actual day itself is a strange one. No one really knows quite what to do, and it can be quite stressful. For me, the stress came from knowing my parents had to embark on the 6 hour round trip journey to Leicester to sit through a ceremony that everyone warns you is the most boring 2 hours of your life. To make things easier, we stayed in a hotel Thursday night. If you are travelling from afar for Graduation, I would highly recommend The Holiday Inn in the city centre. Nevertheless, the ceremony itself wasn’t as dull as I was expecting. The speakers were charismatic and, at times, hilarious. The most poignant moment was when Honorary Graduate Professor Gordon Campbell commented on ‘shameful’ tuition fees. Unsurprisingly, his comments were applauded by all.

The Modern Languages department is a relatively small one. Everyone knows eachother, so it was nice that everyone within it was cheered as they went on stage. Some I’ll keep in touch with; some I’ll never see again. That’s just the way it goes, but I genuinely hope everyone gets to where they want to be.

As for the cap and gown, well, they’re just ridiculous. But after a few hours of complaining that the gown ‘did nothing for me’ and that I’m ‘not a hat person’, I didn’t really want to give them back. It turned out to be a fun day of posing for photos, and it ended with some well-earned drinks in the pub.

Congratulations to my fellow Leicester students who graduated this week. We did it. 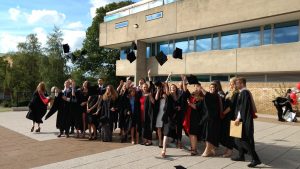