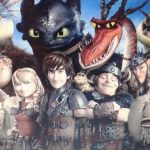 Catching up with some essential movies

Yes, when I say “essential”, that’s an exaggeration. The truth is, I have never really been a fan of animation movies, I’m not sure why. When I was a small child, I mostly watched good old Tom & Jerry and now I mostly watch films that are… well, “normal” films, not animated ones. Some of […]

Posted in Leisure, Uncategorized | Tagged animation, finding nemo, how to train your dragon, inside out, kung fu panda, movie