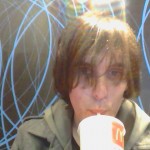 I am currently sat in London, the McDonalds across from Kings Cross using the free wifi to be precise … here’s a picture of me enjoying a Sprite courtesy of the Coca-Cola Company … So, that’s the most capitalist blog opening I’ll ever write, from the University of Leicester and beyond … nothing like a […]