Even though it’s Good Friday I’m still thinking about you all, so here’s another post, enjoy!

So I’ve told you I know nothing about any of the units the undergraduates take unless I’ve demonstrated on them. So welcome to BS1008 – a first year unit I recently demonstrated on, if you want to know more about demonstrating in general you’re in luck, you can follow this lovely link for my blog post all about it. So back to BS1008, I was asked to help out on this unit almost straight after BS1005 finished. This was a smaller commitment, with no marking included (bonus!), just 2 hrs/week with students while they played a game based on evolution. I’m firmly in the not turning down opportunities camp so I said yes. There were only a few of us needed to demonstrate (4), nothing like on BS1005 where there were 15 of us, and each week we got a table of student who played the game in pairs.

The game was developed by Dr Cas Kramer of the GENIE CETL as an innovative way to teach about evolution in populations. In short the students play in pairs and all have the same starting population size which can then increase or decrease based on random events within their environment. A lot of the mutations they pick up (quite literally, to play you pick up cards as you go around) seem to have no immediate effect, however further along in the game living underground might suddenly become a huge benefit and your population could flourish. The diversity that appears between teams teaches how lots of small events can result in very different species. I think this activity shows how much the University of Leicester values innovation in teaching, it’s a very different task to any kind of lecture or lab session and gives students a visual representation of the concepts they are being taught.

The first week I was a little nervous, I’d only just learnt the rules of the game, but quickly settled in to the routine. That first week a lot of the students who were on my benches for BS1005 were timetabled for the session and I was pretty pleased that they chose to come and sit at my table 🙂 . They were pretty creative with their species, which all start off fairly simple with 1 or 2 pairs of legs and eyes, maybe a pair of antennae and white in colour. Charlie very kindly sent me a copy of his teams species, which they named Ivanivisk. You can see him below, with a complete description of all the features he acquired throughout the game. 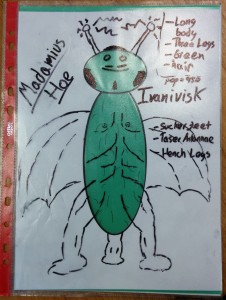 Thank you Charlie for emailing me a copy of Ivanivisk

The other two weeks I had students I hadn’t met before so had to work a little harder to encourage them to begin with but once the game got going they seemed to enjoy it. None of them however seemed to be quite as fond of their species as week 1’s teams. All the species in week 1 were as exotic as Ivanivisk, although that was based more on artistic license than the actual rules of the game. I know the evolution board game isn’t reserved only for the undergraduate students, and it makes appearances at GENIE events, so hopefully I won’t have to wait until March 2015 to play again 🙂