This week ITV’s 2 part drama Code of a Killer concluded, it’s airing was pretty exciting for us here in the Genetics department as the story line focused on the first ever murder enquiry to use Prof. Sir Alec Jeffery’s DNA fingerprinting technique to identify the murderer. This is a technique he developed here in the Genetics department of the University of Leicester 30 years ago. As they shot the lecture scenes and some of the lab work on campus “my” building, the Adrian building, where Prof. Jeffery’s was based, got it’s own little airing on prime time TV and students were given the opportunity to take part as extras (I was busy 🙁 ). What’s really important about this is how well the science was communicated. Science communication and finding ways to make science accessible to everyone are hugely important and from the attention Code of a Killer got (yes my mum did message me to tell me it was on AND based at my University, I let her know it wasn’t just my University it was my department!) I think we can say that the story behind the discovery of DNA finger printing was well received by a large audience (~5million viewers).

Code of a Killer (itv.com) 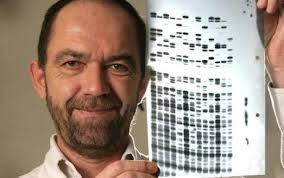 As I was watching I realised I could use this to help explain some of my work! Some of the techniques shown I use in my day to day work in the lab, admittedly it’s probably a little quicker these days but the principles remain. So what do I actually do? Well I work on the genetics of a bacteria and I spend time looking at populations that appear to be identical are actually different in some ways. To do this I extract DNA from the bacteria and then I digest it (just like in Code of a Killer). The next step has moved on a little and I actually then use a machine to look directly at the results rather than producing an image like Prof. Jeffery’s. This lets me be quantitative in the numbers and work out how much of the population has one genetic marker and how much has another. These differences have been proved to be important in the virulence of the bacteria I work on and we hope that by investigating it further we can discover why the bacteria doesn’t cause disease *most* of the time, but when it does it can be severe.

This is the end result I get today using similar techniques.

I’ll finish by telling you that since it was first discovered DNA fingerprinting has evolved, in Prof. Jeffery’s original method you needed fairly large quantities of DNA, today we are able to amplify DNA in the lab very efficiently. This means that much smaller amounts of DNA are needed to obtain DNA profiles. I do have to warn you though it’s still not as quick to do as they make it look on CSI!

If you haven’t seen Code of a Killer it’s still avaible on ITV player so go and check it out, it’s interesting, has great actors and is full of realistic science 🙂