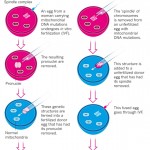 Posted by Megan in Genetics on February 6, 2015

All opinions here are my own, I respect that other’s may have differing views. As this is a genetics blog I thought I would write about MP’s voting overwhelmingly in favour of what the media have named three-person babies, this was despite opposition from some in the Church. While the Church, among other groups, has branded the procedure unethical […]

This week in Science

This has been quite a week for science with Philae sucessfully landing on comet 67P/Churyumov–Gerasimenko. I like to think this is a week that will inspire a new generation of scientists and the coverage that Rosetta/Philae and the European Space Ageny have had is brilliant, however there are several other stories that have either stemmed from […]