Bastille – The Perks of an O2 Academy

Hi everyone, today I thought I’d write about something non-academic, but linked to university life. Here at Leicester, we have an O2 Academy within the Percy Gee students union building, which is pretty cool (I think we’re the only university in the UK to have one, but I’m not 100% sure, so don’t quote me on that!).

The O2 is used as a clubbing venue, where there are two weekly club nights:

The current first years will no doubt have experience the O2 already, as many of the freshers fortnight events are held there, such as the opening School Disco Party, and the closing party, which are usually both packed!

Not only does the it have club nights, but as with the other O2 Academies around the country, it is also a music venue, and on Thursday, I went to see Bastille there.  Bastille are one of my favourite bands, and they were absolutely brilliant live. There was a great atmosphere during the concert, in my opinion made better by the fact that it is a smaller venue than most, which allows you to get closer to the performers, and allows them to interact with the audience more.

There are a lot of music performances at the O2, covering a wide variety of music – for example last year I went to see Marina and the Diamonds there (who was also brilliant), and my housemates went to see Kasabian (who are originally from Leicester) during our first year. You can check out who is playing at the O2 on their website (click here). Another bonus is that the tickets are relatively cheap – to see Bastille was only £18, which would have been much more for a bigger venue such as the O2 in London, and doesn’t break the bank for us students! So if you’re in Leicester, check out who is playing and I would definitely recommend getting tickets if there is a band/singer you like, because there is a great atmosphere!

Check out a couple of photos I took of Bastille from Thursday below: 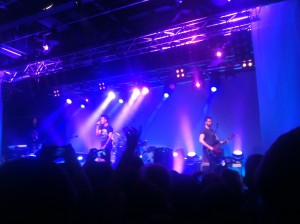 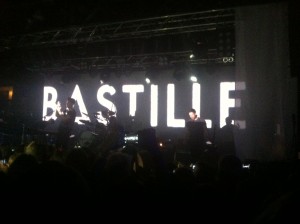 One response to “Bastille – The Perks of an O2 Academy”