Posted by Connie in Geography on February 16, 2014

We had a Sunday morning flight on our trip, and in order for us to be at the airport on time, we had to meet at university in the early hours of the morning ready for the coach to leave at 3am. This was actually quite amusing as we were waiting for the coach whilst drunk people coming out of the O2 Academy from the Propaganda club night that used to be on a Saturday! Anyway, we arrived in Spain in the afternoon after a short flight, and had a coach journey to our hotel. Almeria is a dry land area in the south of Spain, and we stayed in a small town called Mojacar – it was basically a line of restaurants, shops and hotels along a strip of beach (with houses behind), and the hotel overlooked the sea so it was lovely watching the sunrise in the mornings before going out into the field!

We were in Almeria mostly to study the geomorphology of the dryland. Geomorphology is the study of the landscape, and how it has evolved over time to look the way it is now.  There is a second year module in semester 1 called ‘Understanding Landscapes’ which gives you lots of knowledge ready for the trip, but it really doesn’t matter if you didn’t take that module (I didn’t take it and didn’t struggle to understand on the trip) because the first two days we went round lots of places, and lecturers talked to us in small groups about the landscape and gave us knowledge on how it has formed.

We visited quite a few places on those first two days, for example several desert-like areas, the foothills of a mountain range, and an old inland sea where we saw marine shells in the rocks of cliff faces. We also went to a large bowl-shaped salt pan, with salt literally lining the ground like snow (see photos below…), and we climbed up to see a small fault line which was pretty cool! We also climbed a large tor, which represented the old height of the land before the ground around the tor was eroded by rivers, and it gave us a wonderful 360 degree view of the landscape

There’s plenty more things we did in those days that I could spend ages talking about, but I won’t say too much more as I don’t want to spoil the excitement of anyone going on the trip in the future!  But I am going to talk a bit about what field research we did on the second half of the trip in a blog which I’ll be posting next week, so be sure to come back soon for the next instalment!

In the mean time, check out a few photos I took on the first few days of the the field trip… 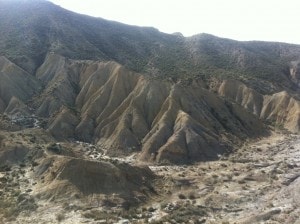 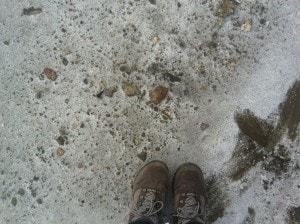 Salt on the ground 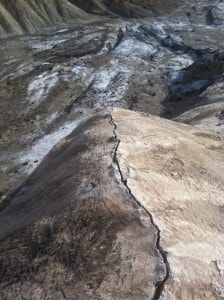 Fault line in Almeria – the white stuff on the ground behind is salt! 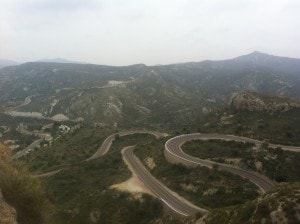 View of a winding road from a tor

One response to “Almeria – part 1”