A week in Spain – the Almeria field trip part 1

Posted by Caroline in Geography on February 28, 2015

Hola mis amigos! I have recently returned from the second year overseas field trip – to Almeria in Spain! We BSc geographers spent a week exploring and explaining the landscape, thinking, drawing, designing, collecting data, mastering Spanish and basking in freezing February sunlight. Why do we go to Almeria? As part of the Research Design module, the field trip serves to develop our ability to form research questions and design a research project. This is all preparation for our dissertation proposals, and Almeria, a highly interesting area geologically and environmentally, provides tons of inspiration, perspective and knowledge to help us do this. My predecessor geography blogger, Connie, gave you a great detailed account of her experience in 2013, however reading it again there are quite a few differences to the trip this year. Also no two experiences are alike, so here’s mine!

We set off on our journey with a coach to Birmingham Airport at 10am on Saturday 14th Feburary. We took a 2 hour flight to Alicante airport, followed by a 3 hour coach journey to our hotel in Mojacer. 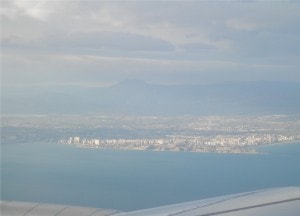 View of Alicante from the plane 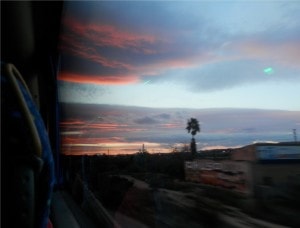 Around 6pm local time in the coach to Mojacer

Our hotel was actually really nice and better than accommodation on previous field trips. Everything looked sleek and modern, the rooms were beautiful and cleaned every morning. There was a great range of food at dinner and you could choose what you wanted from the buffet. There were also a few pool tables and not to mention a fantastic view of the sea, as the hotel was right on the sea front!

Panorama of the coastline, with our hotel the large white building in the centre

The first two days consisted of tours of the area. We visited numerous sites, beginning with a highpoint from where you could say the whole of the Tabernas basin. We practised taking field sketches of the landscape and discussed how we thought it had formed. It turned out that the area is part of a half-Graben hinge system, whereby over millions of years, the movement of the African plate into the Eurasian plate caused mountains to form and the basin area to move downwards due to faulting.

Me sketching in my field note book, very cold because of the wind!

Panorama of everyone looking at the landscape

We piled onto the coach again and stopped at a variety of places, including another high point with a castle where part of Indiana Jones was filmed and a place called Mini Hollywood, where they used to film westerns! The landscape here definitely looked like the Wild West, as it is the only semi-arid desert area in Europe  – meaning a lot of cacti! 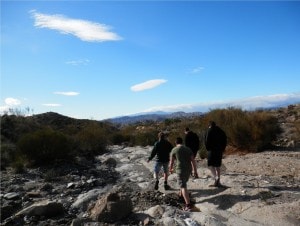 Looking at the ephemeral river in Mini Hollywood

Group photo on the oldest river terrace in the basin!

Other places we visited included the oldest river terrace in the basin, which was a puzzle to solve but we eventually got there! Basically as the river eroded laterally and vertically, incising, it left behind step-like features or terraces. This one got left behind because it was made of more resistant rock. We also went to an area which looked to be covered in snow, but after a taste-test turned out to be salt! The salt pan had a variety of interesting features like ‘travertine’ formations where rainwater chemically interacts with calcium carbonate. 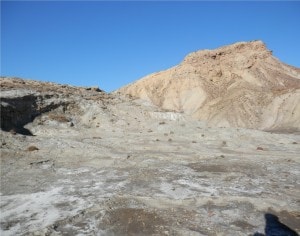 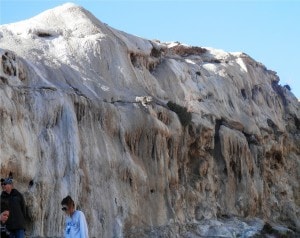 How do you think this formed? 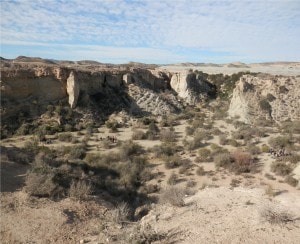 This area was abundant with shell fossils! Until about 3 million years ago, for 10 years the basin was an ocean basin and sediments built up creating the landscape today! We found hundreds of beautiful Indian oyster fossils which we were able to pick up and study.

At the end of the second day we stopped off at a beach for some down time, the sun had nearly gone down and we were all very tired but it was still at lot of fun! 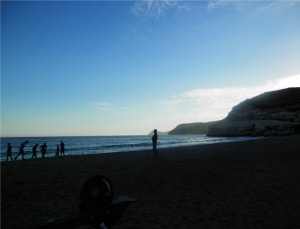 Lets go to the beach beach

In the next post I will go on to talk about the last 3 days of the field trip which relate to the coursework for this module, with lots more photos. As always, if you have any questions, don’t hesitate to ask below 🙂