Battling nature – the fight to save Vicky Park Pond

Posted by Caroline in Geography on October 24, 2015

It’s a widely-used narrative: humanity vs. nature. Man vs. crocodile, little town vs. big tornado, riverside town vs. flooding river, farmer vs. pests. In modern western society we’re prone to putting ourselves outside of nature, that we are separate, superior to other species and the ’empty wilderness’. We treat the planet as our rightful property, extract resources from the earth for economic gain, and box ourselves away from the elements in warm buildings and big cities. The more we try to manipulate our surroundings, the greater the disconnect with natural ecosystems around us, and the more nature comes back to bite us.

Hence, on the same lines as global efforts to curb climate change, there has been a call to reconnect with the natural world, and work with it instead of against it. For example allowing artificially straightened rivers to go back to their natural course, which reduces flooding downstream, and the rewilding movement, which aims to bring back missing key species, that have a knock on affect on the productivity of a whole ecosystem. Monbiot explains it well in this video if you’re interested!

If you want to learn more about the complexity of nature, environment and society, in all areas of the world, throughout history and in all economic and political context, then I suggest you study Geography at Leicester 😉 Anyhow the reason I am summarising this change in popular thought is that this week I had my own battle with nature – restoring the pond in Victoria Park. At first glance at the pond I thought – do we really have to get rid of all those CO2 capturing plants? 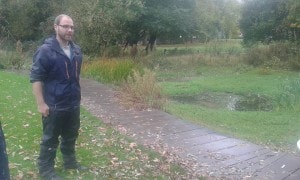 But, on discussion with the park ranger, the fluffy green leaves in the pond are actually a non-native invasive species called Parrot’s Feather. As you can see in the photo, it has completely covered the pond (bar one little puddle), and is suffocating other species in the pond. Apparently it’s the water world version of Japanese Knotweed, which is incredibly difficult to get rid of and if there is even a tiny spec of plant remaining, it will recolonise and overtake your garden again. 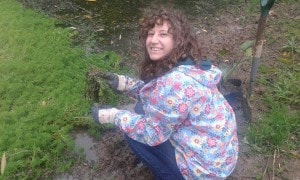 Since the Parrot’s Feather is of critical risk to ponds, he said that in normal circumstances, the advice would be to abandon the pond and leave it for dead. But in this case the pond is worth trying to save. Anyone can see it is an important center point for wildlife in the park, where squirrels drink, ducks float and frogs leap and the biodiversity ten folds. 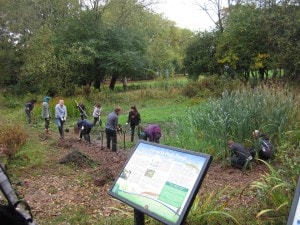 The start of the day

So the battle was on against the Parrots Feather, for the sake of all the other species in the park. There was a real community spirit throughout the day, as both us members of the Environmental Action Society and also members of the public were getting to know each other, and working together to save something we all care about. 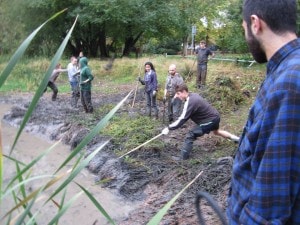 The stems and roots of the plant were so entangled and tough that they formed a kind of carpet over the whole pond. If you’ve seen the Life of Pi it was like the floating island – we could stand on it and not get wet! 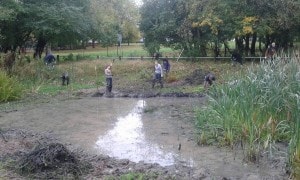 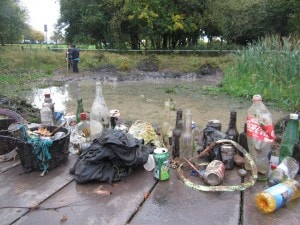 We found a lot of odd items in the pond – from road signs to old perfume bottles you could still smell the perfume. It is a clear visual of the man vs. nature narrative that I mentioned at the start of this article – so many people simply do not care about the natural systems that support them. 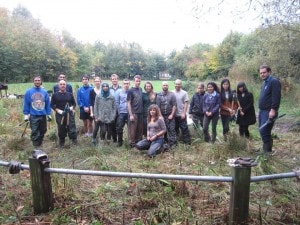 It was a really fun day though – and we will be doing another one very soon so keep an eye out on Environmental Action Society events to get involved!

So my take from this day was remembering that reconnecting with nature and conservation work isn’t all black and white. Introducing some species will decimate an ecosystem, whilst others will give it life again. Human’s have been the cause of many environmental problems, such as this – bringing in foreign plants that upset the balance of our ecosystems- and wiping out other species, so it is up to us to correct the mistakes we’ve made. Whether that’s carefully controlling an environment, or letting it return on to it’s natural state, like the straightened rivers, depends on the situation, and its place in the wider context.

All in the day of a life of a geographer! I hope you found this interesting, if you have any questions let me know!