Preperations, revelations and postcards to Paris

Posted by Caroline in Geography on November 27, 2015

The past 2 has been very busy for the Environmental Action Society! We’ve been on a stall in the SU for 3 days, with multiple aims. Firstly to advertise a film screening that we are putting on – Cowspiracy – a film endorsed by Leonardo Di Caprio, about the food industry and the huge secret that no one is talking about. I haven’t seen it yet but am very excited because apparently it also reveals why environmental organisations don’t try to fight the huge environmental issues associated with meat production. The screening is Monday 30th 7-9pm in Attenborough Film Theatre – come along if you want its free to everyone and there are freebies!

Our second aim is to advertise the Leicester Climate March happening on Saturday. This is a march to raise awareness of the COP21 climate talks happening in Paris in December. These talks are enormously important for preventing a climate catastrophe – world leaders are meeting to negotiate and make a global deal to reduce greenhouse gas emissions amongst other things. As part of this we have borrowed Friends of the Earth’s Postcard to Paris photo frame – and have been getting as many people as possible to have their photo taken in it, to show their support! 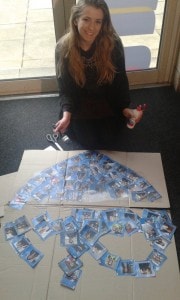 Making a banner with all the postcard to paris pictures! 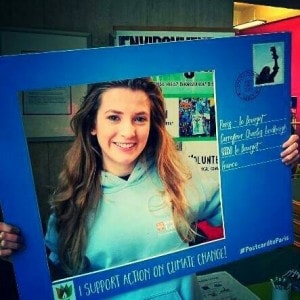 Then also for the march, we have been getting crafty and making lots of banners!

I aim to blog about the march after saturday and will include lots of pictures so that you can see the banners we have made. I am really looking forward to it, since I have never been on a march before and this one will be very peaceful, with a great community spirit since people all over Leicester will be coming together.

Another event I have been to recently is the Leicester Third Annual Low Carbon lecture. This was in the City Hall, and was less like a lecture and more like a conference – with business people and organisations from all over Leicester. After an hour long networking session and free food courtesy of The Real Junk Food Project (a group I hope to volunteer with soon and can’t wait to blog about), we sat in the main room. 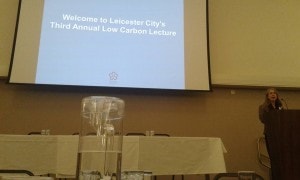 The lecture was by Professor Paul Ekins, Director of UCL ISR and Professor of Energy and Environment Policy at the UCL Energy Institute, and was about the current state of climate change and potential paths we could take to avoid disaster. With specific reference to how Leicester can play its role in the UK, the lecture was set in the context of current government policies and how they are effectively making terrible decisions in terms of climate mitigation and adaptation. There was quite a positive spin on the lecture which I presume was to encourage the audience to go away and take action in their businesses/organisations. It was really interesting however and we had the opportunity to ask questions to a panel at the end. I waited behind after everyone had gone to catch Paul Ekins by himself and ask him why he said a lot about technological innovation and finding ways to improve sustainability of our existing lifestyles, and didn’t mention much about trying to reduce over-consumption – the main reason for the climate crisis in the first place. He said that when he was young like me, he thought the same thing, but he gave up waiting for people to change, and he just went with what was happening and tried to work with it. I’m not sure how much I agree with him but I really appreciated his advice to me! We got a selfie at the end of course. 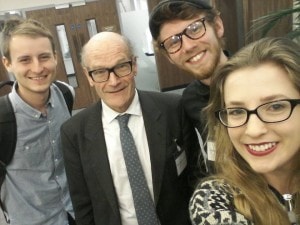 I hope you enjoyed reading, will blog again in the next couple days about the march!