Posted by Caroline in Geography on November 29, 2015

This weekend has been critical in terms of getting world leaders to take notice that people want real action on climate change. The COP21 climate talks are starting tomorrow in Paris, and negotiations will be under way, to set emission reduction targets etc. Its been especially important for marches in cities across the world due to the cancellation of the main climate march in Paris – and it’s been debated whether or not leaders took advantage of the recent terrorist attacks in order to suppress the climate activism.

Anyhow yesterday was the Leicester Climate March, organised by Friends of the Earth. As a society [the Environmental Action Society] we’ve been advertising and preparing for this for ages so it was a big day for us as well as for the cause. Around 400 people turned up, a mix of children, families, elderly people and a few other students, like us but from DMU. It was very cold weather but that couldn’t stop us! As promised, here are my photos from the day! 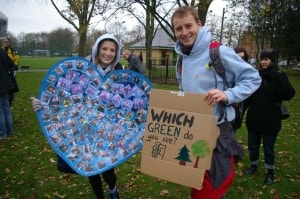 We all gathered in Victoria Park from 11:30 to leave at 12. There was a wonderful atmosphere – socialising, painting our faces, seeing the wonderful banners people had made. Here were a couple of ours – and my UoL heart complete! 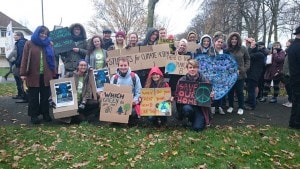 Leicester students – a mix of EAS and DMU 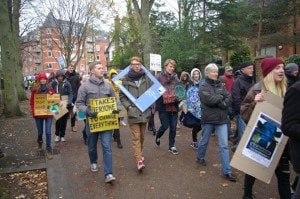 We set off down New Walk. There was a drummer and a guy with a megaphone and we chanted our message so passers by knew what we were marching for! 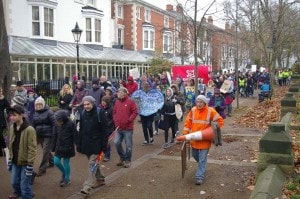 Walking through the city centre was intense – shoppers were stopping and taking photos of us. Not only that but the BBC were filming the whole thing and one of the camera guys said to me ‘I have to get a shot of you!’ I dont think I ended up on TV though 😛 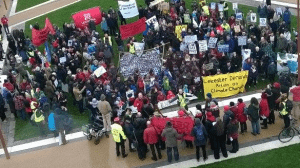 We ended the march at the Jubilee Square, where we listened to the Socialist choir and heard speeches from the organisers. Subway decided to take advantage of the situation and hand out free tasters of coffee and biscuits – which I couldn’t complain about because I was freezing cold – but it was funny because environmentally conscious people are the last people to go and buy a coffee from Subway

It was a great day, I just hope world leaders take notice! Images of marches across the world will be screened at the climate talks so no one can turn a blind eye. I hope you enjoyed reading!