It seems like a lifetime that I have visited Colombia, even though it was six months ago. I do miss Colombia as it was a once in a lifetime experience. I do miss the beautiful sunsets and the warm weather. However, I don’t miss the mosquitos or sweat flies. Going to Colombia was a culture shock, as the inhabitants did not speak English properly and the main language was Spanish. Here is my little adventure whilst being in Colombia.

The flight to Colombia was 8-9 hours long with a time difference of -5 hours. The flight was not too bad, as I was in and out of sleep most of the time. Landing in Colombia was so surreal, as I remember in first year I was hoping to go to Colombia and two years later, here I was…in Bogotá, Colombia. We landed in Bogotá in the evening time and the weather was relatively cool. It was like a mild autumn day in Britain. During the time in Bogotá, we went to the paramo located outside the capital. This is a fragile ecosystem and is sensitive to climate change. We only spent about 2-3 days in Bogotá before flying out to Inírida. 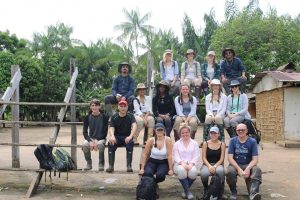 Inírida is located in the Amazon basin and near Venezuela. We stayed in a hotel with a theme of parrots which is understandable as we were in the Amazon Basin. When we arrived, we went around the town as this was our home for almost 8-9 days. We were given a tour by Diago who was the local tour guide. It was a nice welcoming to the town as he spoke about the history of the area and showed us the local football pitch, playground and prison. We also saw the sunset over the river and that was a blissful memory. The next day we went sightseeing around the area. What was our transport? We travelled by boats! We visited a village and we went into the rainforest, did some fishes and oh, we saw some freshwater dolphins. After these relaxing days, we had to start our coursework.

Coursework 1 was based on the different vegetation types around Don diablo farm which was 30 minutes away from the motel. Instead of a boat, we travelled by truck. I have to say, travelling in the truck was one of my highlights, as there was no doors or window. Diago was with us and he pointed out Los Pepe’s land (Narcos fans?). We camped in the farm for one night and it was very different. We slept in hammocks and that was my first time sleeping 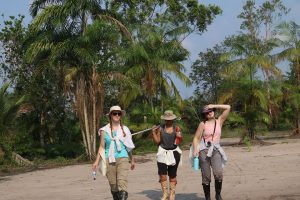 in one. For this night, we were sleeping through a thunderstorm and it was so cold! The sunset was about 6 pm and the sunrise was at 6 am. Honestly, I would go back and relive this moment as it was another highlight.

Hello everyone. My name is Simran and I am a third Geography student. I will be blogging about my adventures as a university student, from flying off to Colombia to staying in a Leicester student house.