A few years ago, I went on holiday to Rhodes, in Greece. I had an absolutely lovely time there, and met lots of interesting, very pleasant people. The thing that struck me the most, however, was that everyone, no matter where they were from, spoke excellent English (or had a fair stab in the right direction). This got me thinking. Are we, as a culture, so narrow minded that we expect everyone to know and speak English, and only English to us? Now I know, I know, English is the most commonly spoken language on Earth, but still. It seems weird that after GCSE, most of us don’t continue to practice languages, and even at GCSE level, I doubt many of us actually enjoyed the process.

So, last year, at the beginning of my second year, I made a decision.
I was going to learn German.
Now, what’s handy is that Leicester runs a set of courses for adult (student aged and older) language students, called, inspiringly, Languages at Leicester. They run classes in varying levels, so whatever your level, you can start or continue learning. As an additional bonus, they offer a discount for students at the University of Leicester!

So, in October of last year, my mind filled with images of chatting to people about wurst and schwarzwälder kirschtorte, I began my course.
Obviously, that didn’t happen for a while.
I began German 1, which is basic level German. In the first lesson we started with ‘hello, my name is…’ and then began slowly and steadily working our way up. The classes are small enough that they run at a suitable pace for everyone, and you can always ask the teachers for extra help or another explanation. 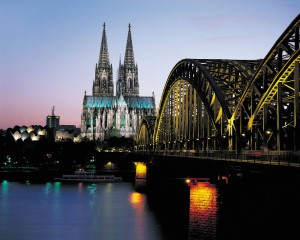 I don't have any images directly relating to the course. So here's a picture of Cologne.

Learning a language along with your course is a lot of work, but so worth it. It’s incredibly rewarding to be able to have even a slight grasp of a language, and to know that I could hold a conversation with someone, if the occasion arose. I just have to find a German person.

The teachers are also absolutely brilliant. More often than not, they’re native speakers of the language, and it gives me a lot of confidence to know that I’m being taught by someone who’s spoken a language all their life, and is also an excellent teacher; meaning they can put up with our silly questions, and also know how to answer them!  Take Petra, my teacher, who is originally from Austria. She’s very clear, gives us a lot of variety to our lessons (book work and conversation) and is also up for the odd joke about Arnold Schwarzenegger.

I thoroughly recommend looking into studying a language during your time at Leicester- I mean, you’ve got three years, it’s not like you’re short on time! Not only is it nice to learn about another culture, but language skills look great on your C.V, and are becoming increasingly important as the job market becomes more international.

Give it a thought!

Clare graduated from the University of Leicester in Summer 2012 and is no longer blogging for this site.