The Leicester comedy festival is back! It was on from the 8-24 of February this year, and I was lucky enough to go and see Richard Herring last week, doing his new show, ‘What is love anyway?’.

The Leicester comedy festival started in 1994 with 40 events programmed into 23 venues over 7 days throughout Leicestershire. To say it has grown is a bit of an understatement; this year’s festival featured over 410 shows, in over 50 venues.

Now, as someone who likes a good giggle, I was very pleased when I became aware of this festival, as one amazing thing about the Leicester comedy festival, aside from it being a jolly spiffing night out, is the cheapness of the tickets! Hardly any of the shows cost more than £15 to go and see, with some as cheap as a fiver. 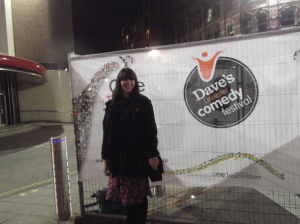 I forgot I had a camera when getting my ticket signed, so this is a picture of me in front of a Leicester Comedy Festival sign.

There’s lots of well-known comedians who do shows (Sarah Millican, Russell Howard, Ceri Dupree), as well as lesser known and local comedians. In addition, there’s various comedy plays as well as the stand-up shows that you can go and see.

I well recommend that you go to see a show when you get to Leicester, to fully experience a bit of the city’s culture- and hopefully to have a laugh at some beardy man (Richard Herring) discussing how exponential maths caused a romantic gesture featuring a Ferrero Rocher to go dangerously out of control.

Clare graduated from the University of Leicester in Summer 2012 and is no longer blogging for this site.