Tenerife; a beautiful volcanic island off the West coast of Africa full of sun, surf and black sandy beaches. A brilliant place for a holiday. Or some fieldwork. 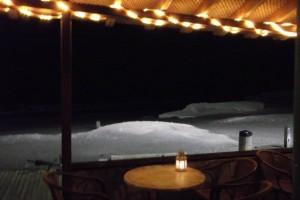 I really enjoy fieldwork so chose as much as possible. The Physical Volcanology module is split into three; an exam on the lecture series, performance on the fieldtrip to Tenerife and a report on the fieldwork.

It was a long hard struggle to get that report done.

This December saw me in Tenerife, enjoying a bit of mid winter sunshine as I tried to get to grips with basic volcanology. Only today I handed in my report, which explains why I’ve not been posting too much lately.

Accomodation for the trip was in a lovely German run hotel in El Medano, right on the beach. Forget Los Cristianos, the beach was lovely and not too crowded. Maybe that was just us, seeing it mainly at night, on the 23rd December. The food was good and the salad bar delicious. Canarian potatoies were a particular local delicacy. 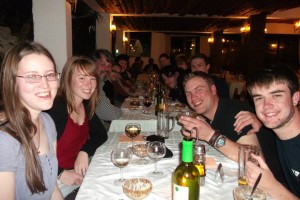 However, the tapioca wasn’t to everyone’s taste. 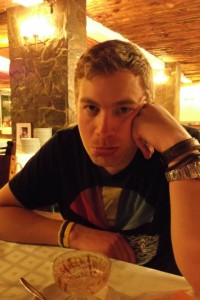 On the plane on the way out we were given little summaries of the geology to read up on. You’d be forgiven for thinking that Tenerife is the volcanic island over the volcano Mt Teide. Its not. Teide is just the latest in a series of volcanoes that are all nested within each other. The main bulk of the above sea level extent of the island is built from the deposits of Las Canadas. Teide sits inside the top of Las Canadas. Las Canadas sits inside three older volcanoes. 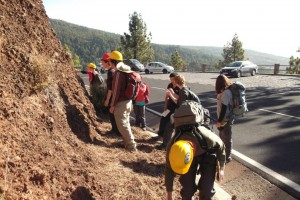 We did do some work there, honest!

Lava  deposits from the base of Mt Teide.

Fieldwork was initially confusing but after the first exposure, we got to grips with volcanic deposits. 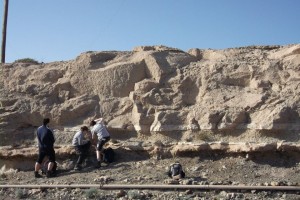 The scenery was beautiful and varied and we took a trip to the top of the Las Canadas volcano. The weather was exceptionally clear 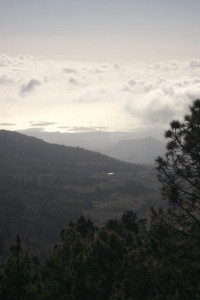 From halfway up the 3km subaeriel cone of the much larger volcano.

From halfway up the 3km subaeriel cone of the much larger volcano.

On the last two days we were given free reign from work as a large group. We were taken to small study areas in wadis and road cuts and were left there to work out the geological history of the rocks. 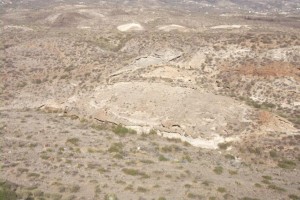 My study area! This tiny 150m odd long exposure has consumed the last two weeks of my life in trying to work out what happened here. Luckily, that’s all done now. Unluckily, I didn’t have the gorgeous Tenerife sunshine to help.

A time consuming and frustrating exercise at times, it was nevertheless really quite fun. Warm sun, cool breezes and the sounds of surf all made it worthwhile, as well as the eventual satisfaction of working something out. 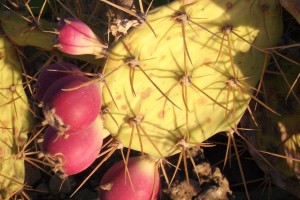 And not treading on any of these. They may have been the reason for the occassional geologists scream that broke the sound of surf.

It wasn’t all hard work and no play. We got some time to relax when we got back early one night. As our hotel was on the beach, we enjoyed the +20 degree weather by going swimming. Feeling smug that we were in shorts when it was snowing back home. 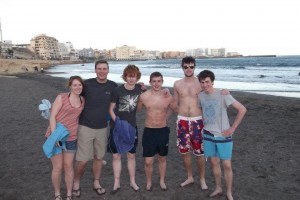 The sea was a little chilly, but much warmer than the pool!

After our triumphant return (we got back to Leicester at around 2am, 23rd December), Christmas and then exams, reports were written and lectures given.

In summary, I now know volcanoes don’t only go ‘Bang!’. They can also go ‘Roar!’.