University of Leicester holidays are long. Really long. We get a month off at Christmas, a month off at Easter and 3 months off over the summer. Officially, we only work 7 months of the year. If you are a geologist, it is a little different.

Geologists have to work when the weather is good or the ground can be seen. As such, we use the lovely long vacations to go on nice walking holidays to various places. This time, 16 of us took a minibus and 2 weeks to trail around Scotland’s highlands and islands.

The obligatory highland cow. An essential image from any Scottish field-trip.

The aim of the game was to find out the entire history of the  of NW Scotland in just two weeks from the oldest rocks in Britain at 3GA age  to the youngest drift in the area. 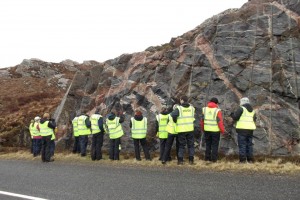 Sometimes, the rocks were a bit more complicated than simple layering. The hi-vis jackets helped us think.

Rocks can be confusing.

We crawled through bogs, climbed to the tops of hills, battled sheep for space to look at the rocks and the weather for the chance to get outdoors, invented wild theories and tried to hunt the legendary Haggis. Ok, so the last one isn’t true but we did sing rousing songs  in the minibus. And eat chips. 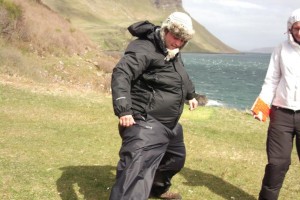 Trousers come in several sizes. Not just Men’s size and Women’s size. It’s worth paying attention to the label when buying them. Sometimes it reads XXXL, when you are a M.

On our little tour, we saw the Moine thrust, lots of folding, faulting and stacking of rocks, unconformities and dykes galore and some sedimentary. 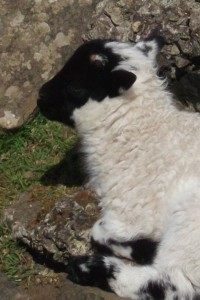 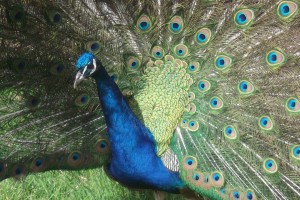 This module was a little different from fieldwork in earlier years as 34% of the marks were given for contributions within the field with the remaing 66% going to a chart or table of the timing of events in the history of Scotland. 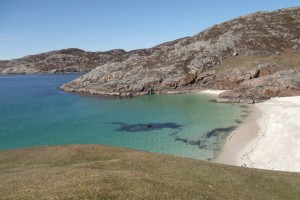 Beautiful beaches in the Mediterranean. Well, ok, Achmelvich on the NW cost of Scotland.

The rocks on the beaches needed a lot of intense studying. Whilst lying down. On the sand.

But in the end, the weather was decent, the rocks interesting and the staff knew their stuff. It was very relaxed with many group photos occurring as it was some of the groups last field trip as University of Leicester undergraduates. A sad day for us all. But the pictures were hilarious. 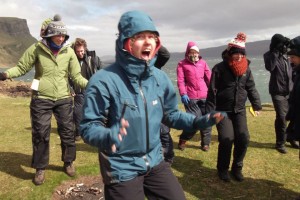 It was very windy. So windy, photos taken when jumping were impossible as we were getting blown sideways.