Exams occurred, term ended, and third year finished. The end of one year leads to the beginning of the next year. Which for me, is the fourth and final.

(Boo for the final year and scared at it being the fourth).

Now, as I am sure I have mentioned before, I quite like the odd bit of fieldwork now and again. In fact, I have gone on a fieldtrip during the summer every year I have been at University. This summer (technically fourth year) I got a head start on my fourth year modules  and headed off down to the Alps with a few (19) coursemates and a couple of staff (4).

It wouldn’t be a blog about the Alps without a yodeller or a cow. Cows were easier to find.

Now, due to the whole economic recession and all (blah blah blah) the University wanted to keep the costs fairly low. So, we drove. Yes, we drove. 6am saw us all piled into 2 minibuses and driving from Leicester to Verdun.

We got the ferry over the channel, of course. 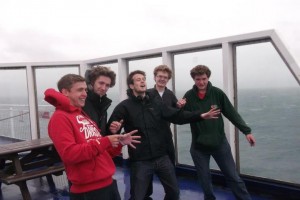 The crossing to France was a little choppy.

Once in France, we all bought some delicious cheese that slowly fermented delightfully in the 30 degree tin can with no air con and few open windows leading to the all pervading sweet odour of old brie, hot geologist and sun tan lotion that lingered for 14 days. And maybe longer. After that, we handed the bus back.

We crossed the Alps heading South staying in various hostels and hotels ranging in quality through 5 countries, 4 languages and 3 language variations.

The view from Weggis 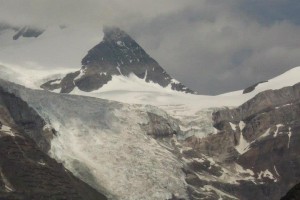 The Weisshorn. Covered in glaciers, near Randa.

I had two favourite stops of the trip-

1. Looking at the boundary between the crust and the mantle near Finero. 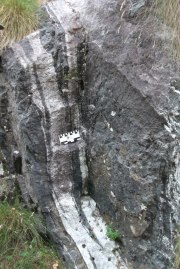 This is the boundary between the mantle and the crust. Normally about 30km below the surface, but not here.

2. Looking at the termal moraine at the foot of a glacier. At both locations there were lots of beautiful rocks in greens and whites, pinks and blues. 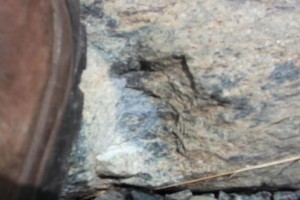 A vein within a rock containing lots of different coloured minerals. 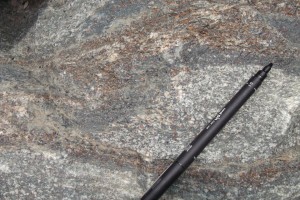 Multicoloured, very deformed rocks that used to be on the ocean floor. A long, long time ago…

So I’m a magpie and did Geology because I like shiny things. Please don’t tell my lecturers!

Well, Ok, there were 3 favourite stops. Seeing the dam where they filmed the opening sequence to Goldeneye was pretty cool too.   Would you believe some people actually bungee jump off it? The Geology (other than going to show folk build dams in some pretty silly places) was not hugely relevent at that stop, hence why it isn’t at the top of the list.

Does it look familiar, Mr Bond?

But my favourite hotel was in Serpiano (Italian Switzerland) This was a 5* spa with a swimming pool sauna, steam room, only 2 to a bedroom and delicious food. The view across the valley was stunning with sharp mountains, a deep lake and lights all across the valleyu. Fireflies flew around the gardens in the evening and the storm that rolled along the valley was spectacular. 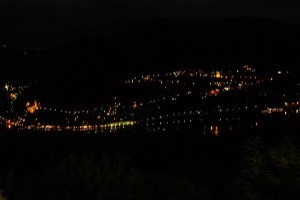 The view from my room at night.. Believe me when I say, the image doesn’t do it justice

The only downside to this fantastic spa hotel? The moment I got out the shower to find half my bedroom had flooded, all the bathroom was drenched and the corridor outside. Not speaking any Italian, I took a friend that did with me to the desk. It turns out that ‘La camera cest inundatia’ (My room is inundated) is not the correct Italian for what we were trying to explain. The attempt in German ‘Mein Zimmer ist zu nass.’ (My room is too wet) did also not cut a lot of ice. Maybe it was how we said it. As soon as we got our point across, they were very helpful and it was all sorted out before we were back from our delectable dinner. 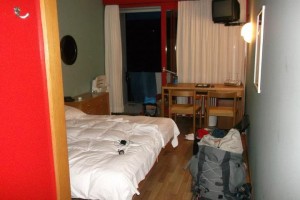 The room was about 2″ deep from where the image is taken to the rucksack. it was damp.

Further adventures involving drawing hills, looking for shiny rocks, cable car trips up mountains, language mishaps in the supermarkets, the quest for more ice cream, foreign food and even a little bit of Geology now and again more than made up for the many hours in the Cheese Bus. 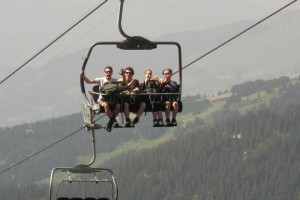 We really were working. Well, on our way to work. 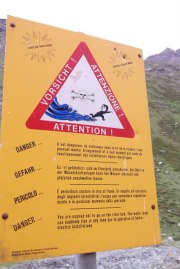 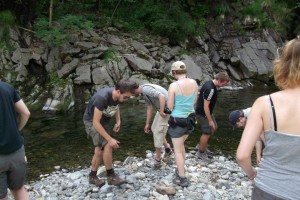 The hunt for beautiful rocks to carry home. WARNING! Do not try and collect so many rocks your rucksack is too heavy to lift so you fall backwards out of the minibus on Victoria Park Road because then you look like a prune. And no windowsill is large enough to contain that kind of collection.

In conclusion, the Alps fieldcourse was a huge amount of fun, and fieldwork should be done at every opportunity (in my opinion). Just remember, a real Geologists rock collection only contains rocks they collected themselves!