Global warming has killed before – is it killing again?

A module that all straight geology (or palaeontology) students take in second year is ‘Major events in the history of life’. On a basic level, it tells the story of evolution through the ages, focusing only on the ‘Major’ events along the way. Our lecturer, Dr Sarah Gabbot, aside from being a great lecturer, is a massive hippy. Every lecture she manages to worm in a small rant about how humans are destroying the earth. But jokes aside she raises some very interesting issues; one in particular brought home an all too familiar message…

Let me take you back to a time 250 million years ago where the climate was much hotter than it is today. It is the end of the Permian; the sea is teaming with life, from tiny shelled creatures to huge ammonites. The land is busy too, populated by huge tetrapods and masses of Permian flora. But after only 1 million years, between 80 and 95% of all species living on earth became extinct. How? Why? This mass extinction is the largest on record since the beginning of Earth’s history, the reason? Global warming.

At the same point in time, terrifying volumes (2-3 million km3) of basalt were spilling over what is now known as the Siberian traps. This induced a significant rise in CO2 which led to the initiation of a deadly cycle:

Rise of CO2 – Global warming – methane hydrates at the bottom of the ocean melt – release more CO2 – etc.. the world heats up like an oven

So what’s the catch?

After this event life took 8 million years to recover but produced some of the most famous of all fossils – the dinosaurs. The extinction carved the way for new and more advanced life. So the real question is – will humans survive? Or will another species evolve to take our place? 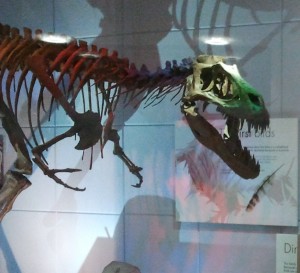 Thanks for reading, if you have an opinion on global warming or mass extinctions please leave a comment!

Obviously, this is just a theory because nobody was actually there. Here’s some more info on the Permian – Triassic extinction: http://palaeo.gly.bris.ac.uk/palaeofiles/permian/intro.html

National geographic have a good article on all of the previous mass extinctions and a little bit about the mass extinction of today. Interested? click-a-ty click —> http://science.nationalgeographic.co.uk/science/prehistoric-world/mass-extinction/