I originally began blogging when I undertook the Leicester Award for Social Networking and now I can’t seem to stop. I blogged about this topic a few months ago…

Something which has certainly sparked my interest since it was announced in October 2014, was the launch of 100 Great Geosites spanning the UK and Ireland by the Geological Society. As a keen field geologist, I am excited to hear that there is finally an interactive map to find sites of geological importance on your doorstep. Categories vary from economic perspectives such as mines, to spectacular structures and extinct super-volcanoes all within a drivable distance.

The launch of the Geosites will be incredibly educational to all ages and backgrounds. It is important to learn about your geological surroundings and to understand events of the past to truly appreciate the unknowns of the future such as earthquakes and volcanoes which can be applied to a global scale. These sites also encompass other aspects such as biology as fossils can be great indicators of palaeoenvironments of the geological past. The Port Askaig Formation on Islay is thought to represent the Snowball Earth theory which proposes Earth’s surface was once frozen and is thought to have triggered the evolution of multi-cellular life. Each site has it’s own significant story.

All that I can say is… This certainly calls for a summer roadtrip! 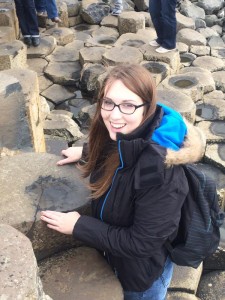 …Finally! Finally! Finally! I can now say I have ticked off my first Geosite. One down, ninety-nine to go.  Unfortunately the reality is that as a student, I needed a job thus my 100 Geosite challenge went out the window this year, however there is still a chance it could happen next year after graduation. I’d love to just pack a sleeping bag, a tent and the essentials and travel the UK. Forget Thailand, Australia and other backpacker hotspots, I’d just like to see some geology. Is that too much for a girl to ask? 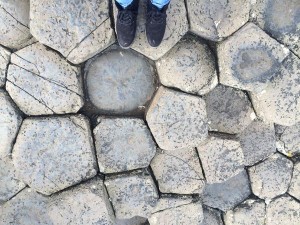 Since my first blog post, the Geological Society have since published an app. As the sites were voted for by the general public, I do feel as though there are a few important sites that should have been included.

How about the oldest fossil in the country? I think that’s pretty significant. Found right on our doorstep in Charnwood Forest, the Charnia masoni can now be found in New Walk Museum right here in Leicester yet it’s not made it to the top 100 Geosites.

On my first fieldtrip here at Leicester, we travelled to the Isle of Arran and visited Siccar Point. It was this particular place were James Hutton, a father of geology, observed something that is still stood by today. It’s since been called Hutton’s Unconformity as it was one of the first sites where this geological feature was recognised.

Have you visited any of the sites? Let me know which ones you’d recommend.