Graduation is magical, no lie. It definitely was one of the most incredible days of my life.

The day began with an early start, soon-to-be graduates and loved ones arriving on campus from across the globe. It may have only been a matter of weeks since I had parted with my fellow course friends, but we were all so excited to see each other and spend the day reminiscing.

After the awkward photography was over and done with, it was time to give my cheeks and grin a rest. We headed over to the Geology Department for our departmental reception. We walked through the doors and my mum was reminiscing about the geology open day which we attended nearly five years ago. I would never have expected to be graduating with so many achievements and most importantly so proud of myself. I owe this to my loved ones and the most amazing team that makes up the Geology Department. 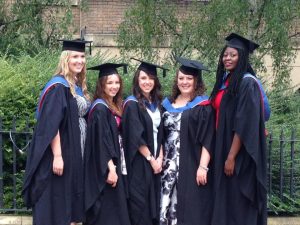 A bucks fizz later, the nerves had dropped slightly. Our head of department, Richard, began with a speech which led on to the awarding of departmental prizes. Compared to tracksuit bottoms and late nights in the department as the last few deadlines were approaching, I looked around at my course friends in their gowns and I must say we do scrub up quite well! Richard then began to dish out the awards. I was lucky enough to be awarded the Dennis Field Award. I had previously found out a few weeks prior, when my best friend text me saying “Congrats on your award!” – I honestly thought she sent it to the wrong person as I didn’t have a clue what she was talking about. After realising she wasn’t joking, I then found out it was awarded to final year students who throughout the course has displayed qualities of scholarship, enthusiasm, determination and integrity. When my name was called, my mum gave a large (and slightly embarrassing) woo! And then it was back to photo taking… 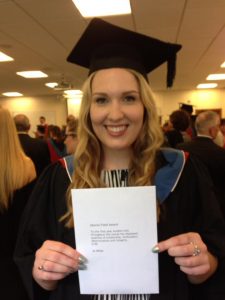 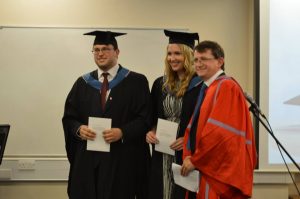 After mingling and more bucks fizz, we headed outside for a departmental photo. And you guessed it… More photos!! 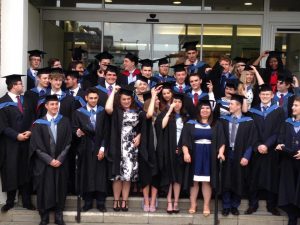 Our ceremony began at 3pm at De Montfort Hall and we eagerly walked over in our heels. Note to self, take pumps just in case! Unfortunately for us, it did rain, which meant our heels often sank in the grass. I had previously been to De Montfort Hall to see Sir David Attenborough’s ‘Beauty in Nature’ lecture. This time, we entered the hall towards the stalls with a band on stage, and organ on full view. The hall was buzzing, with a spare seat not in sight.

As students began to walk onto the stage, nerves all of a sudden came over me! What if I fall? What if my heel breaks? Why did I wear heels? Why was I not sensible enough to bring pumps?

Soon it was Geology’s turn and copious ‘woo!’s’ and claps followed many student’s walk across the stage. We definitely were the liveliest in the crowd. I think it’s probably because we are a close cohort of friends. We’ve seen each other struggle and picked each other up along the way. We’ve helped bind each other’s Masters thesis and cooked each other food when all nighters were on the cards. We’ve seen each other at our lowest and our highest – graduation day. I’m not sure how I will feel in a few months time. I’ve spent the past four years with the greatest bunch of people and I don’t know what it’s going to feel like not seeing them every day: Pete’s jokes, Evie’s brownies, just to name a few.

To all those graduating this week, enjoy it! It’s going to be one of the best days of your life!