From an outsider’s perspective, it might look like geology students spend all their time running off around the world on field trips. However geologists also spend a lot of time inside working in labs. Over the couple of weeks I’ve been spending a lot of time in the lab doing work for my fourth year project. In layman’s terms my project involves looking at the chemical composition of some igneous rocks from Siberia to work out where the magma they formed came from and how they are related to other rocks in the area. To do this I’m analysing them using inductively coupled plasma mass spectrometry (aka ICP-MS), which is one of several bit of analytical equipment in the geology department that us fourth years are able to use for our projects.

Thankfully all the samples I need for my project have already been collected so I haven’t had to go to remote parts of Siberia and cart a load of rocks home (although I would have quite liked having an excuse to have a trip to Russia), so all I’ve needed to do is prepare them for the ICP-MS analysis. The first part of the process is making the each of the rock samples into fine powders. Most of my samples were already powdered but a few of them needed crushing. First of all the rock needs to be split into small chips, which are then crushed using a piston to get roughly sand-sized fragments. The crushed rock fragments are then milled to make them into a fine powder. This involves putting them in a container with agate balls and spinning the containers in the milling machine (basically a bit like high-tec washing machine) to grind them into a fine powder. 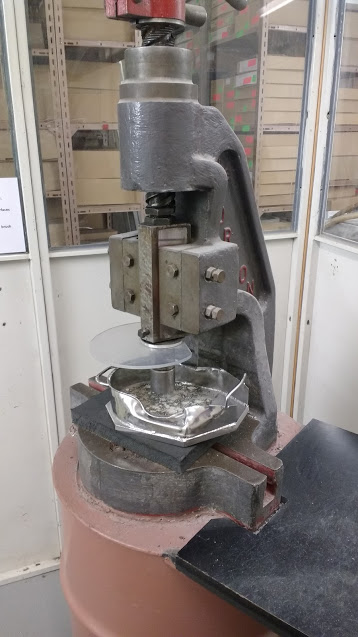 It’s quite therapeutic smashing up rocks with this

The next step is to dissolve the powdered samples, which involves leaving them for a while in a series of concentrated acids to break up the bonds in the crystals, then leaving them on a hotplate to dry before adding the next acid. Once the samples are dissolved they need to be diluted with water, then finally they’re ready for the analysis by the ICP-MS which will give me the data to work with for my project.

Once I have the data the next step is to interpret it in order to address the aims of my project. I’m looking forward to this because it means I can properly get my teeth into the project, something that I’ll be devoting a lot of my time to over the year. I’ll keep you updated with more of the project process as it happens throughout the year.