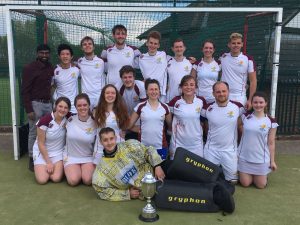 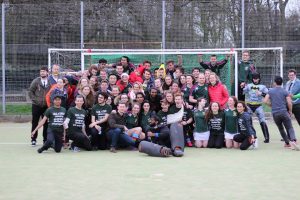 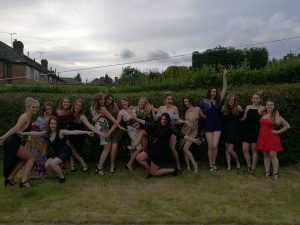 Over my four years at Leicester I have been part of a few societies to varying degrees of commitment.  I have tried out acapella, lacrosse, netball, taekwondo and hockey to name a few.  My friends have also been part of hiking, archery, swimming and water polo, quidditch, ultimate frisbee, hunger for change, and many more.  There are so many sports and societies to get involved in at Leicester, all you have to do is find the right one!

As mentioned before I have been a member of the University of Leicester Mixed Hockey Club (ULMHC) for the past four years.  For those of you who don’t know much about mixed hockey, we have 5 girls and 5 boys (+ a keeper) playing other mixed teams in a local league.  Although it’s not a BUCs sport, we have weekly games and friendlies with other universities.  In the past I played for the first team for two years even playing Varsity twice, against our ‘rival’ DMU.   I’ve now moved onto a different team called Leicester Old Bags, a team made up of ULMHC alumni and other players, but I’m still welcomed back to my old club with open arms.

Hockey has been a massive part of my university experience, helping me cope with stress and frustration from geology.  It has also provided me a great group of friends and support network through the years, as we train and play together 4 times a week.  Sports also offer the chance to meet people from all walks of life, course and year – I have met 4th year PhDs through to new fresher’s every year.

But being part of a sports team isn’t all about the playing.  The club has weekly socials – these are nights out to the pub, house parties, and bar crawls which often end at the O2 (our university club).  The environments around these socials are very inclusive and fun, with the option of drinking or being sober.   We have two great social secretaries every year (being a previous ‘social sec’ myself) who plan each event, advertise it to the club and try hard to make it enjoyable for every member.

Each is run by students for students, with various levels of skill and commitment available.  Personally, I think sport and ULMHC and Old Bags have added so much to my university life.  I know I wouldn’t have become as out-going and confident as I am now.  It also provides a great distraction from deadlines as well as keeping you fit during stress-eating exam periods.

Keep an eye out for my later post focussing on my experience with academic societies.

I'm Lucy, a fourth year geologist at the University of Leicester. I'm currently completing my master's in Applied and Environmental Geology, studying Serbian Gold. I spent my third year in Arizona on a study abroad so look for posts about studying abroad, 4th year life, sports and committee-roles.