This is my last post as a University of Leicester Student Blogger. My time at Leicester has gone incredibly quickly and now that I’ve graduated it’s time for me to go out into the real world (and see if it really is as scary as it seems!). Whilst I’ve been a student here I’ve had […] 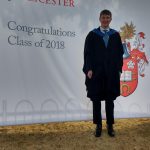 Graduation – The End of an Era

Last Thursday my time as a student at Leicester officially came to an end with my graduation. After 4 years of hard work it was lovely to have the opportunity to celebrate and receive my degree certificate. It was a fantastic day and wonderful to see everyone celebrating their successes with friends and family. The […]