Sarah has already posted about Holocaust Memorial Day yesterday, but I thought I’d add something I saw on the BBC this week.

A team of archaeologists has been using new geophysics tools to explore the grounds of Treblinka, the former Nazi death camp to the North-East of Warsaw, Poland. During the war and estimated 800,000 people were killed here before a mass escape led to the camp being closed down and all evidence of its notorious actions hidden and deliberately covered up.

The report says that at the end of the war, the Nazis dug up their victims corpses, cremated the remains, burnt their buildings and ploughed over the whole site, built a fake farm and installed a farmer on the property. Yet the memory remains.

You can read about the report here.

Like Sarah, I’ve also visited Auschwitz through the LFA Project, and was profoundly influenced by the experience, particularly the fact that I visited a week before my 18th birthday in March, it was snowing, I was in 6 layers and boots and was still cold. The prisoners there, those that weren’t gassed on arrival, had nothing more than a thin pair of pajamas, and clogs if they were lucky. I couldn’t bear thinking about what the weather alone in the winter months would’ve been like, and a lot of my time there was spent in disbelief and trying to ignore what the worst of mankind can do to his fellow man. You saw decaying buildings and empty spaces, but didn’t want to think about what it would’ve actually been like during the Second World War. 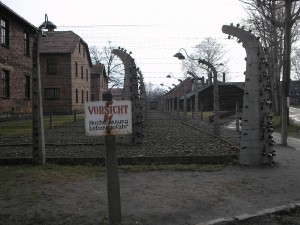 The Double-Electric Fence at Auschwitz I

But all of this is to say that we mustn’t bury our heads in the sand. We can’t ignore the past, neither should we make light of it. We must take history seriously. We can’t give voice to holocaust deniers and fascists. As a fact of history, the holocaust is as axiomatic as the crucifixion of Jesus of Nazereth, or 9/11. As a historian, we can use our skills to critically show the evidence from multiple, independent and early eyewitness attestation. As an archaeologist can dig up the past and see what happened. And as a person, we can remember, and ensure such atrocities never happen again.