On Monday I joined my housemate James for probably the second most bizarre gig I’ve ever been too, seeing a band called “Alestorm“. For those of you who don’t know, Leicester has an O2 Academy, so we were in the medium-sized venue in Queen’s Hall (O2 Academy 2).

And the bizarre thing about Alestorm? As the title suggests, their genre is very specific – all of their songs are about pirates, sung in their scottish accent!! So from tavern wenches, buried treasure, to fighting the Leviathan, being Keelhauled, to enjoying copious amounts of rum, its an experience for those who don’t want to take their music too seriously, whilst simultaneously remaining *Metal!* – My housemate and I definitely gave ourselves whiplash from headbanging (amusing for those who know me!), and I got a few bruises from the moshpit, but better luck than my friend who took a fore-arm to the face! But, to quote a phrase, “A good time was had by all”! Listen to their song Shipwrecked for a flavour of their lyrics and piratey-metal goodness! 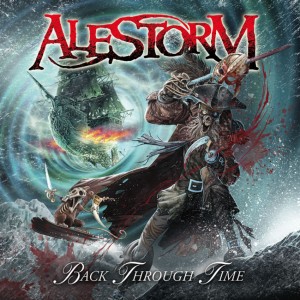 Alestorm's latest album: "Back Through Time"

Alestorm was supported by 2 bands we hadn’t heard of, but were still quite good: The lead singer of “Darkest Era” had a great Irish voice, and it was great to see a female bassist and drummer too! Then, Australian battle-metal band “Claim the Throne” bridged the gap between the two with their slightly heavier music, including their pirate-related song “Set Sail on Ale!“.

The lead singer of Alestorm was dosed up on Codeine following an accident earlier on in the tour which led to some great comments coming from the stage (not to be repeated here!), an added cool thing being he plays the keytar!! They played a great mix of their old and new stuff (they have three albums!) so I knew all of the songs. And its semi-traditional to go to their gigs dressed as a pirate, so there were quite a few bandanas, stripped tops, eyepatches, a couple of cutlasses and even a hook floating around the room! Great atmosphere, great night, even if I had the shortest/least *Metal!* hair in the room…

So I’ve now added Pirate metal to my repetoire of gigs at our O2, after Kasabian, Chase+Status, Hadouken! and Bring Me The Horizon – all very different, but a great show of the variety of acts we get in all the time here! AND priority tickets with no online booking fee!

(The most bizarre gig I’ve been to by the way, was when I was in Sweden last year, at the staff after-party of the 22nd World Scout Jamboree, seeing a band called “Huldre”: Danish folk-metal, a female lead singer who’s little English translation of their lyrics was hilarious, a gothic violin player, and a headbanging hurdy-gurdy player! For a sample, listen to their song Ulevinter here.)

One response to “Scottish. Pirate. Metal.”