Another week has gone, and I have no idea where it went. Work has been of its usual standard of high- with a lot of reading done and I have even picked 2 out of my 3 essay titles that I need to do in the next month or so. To stay on top of everything I have done myself an extensive timetable of work that is just a list of module numbers (HS2000, HS2334, etc…), something that a student quickly becomes acquainted with and has to learn to decipher.

As well as the standard work I have done some volunteering for Dave’s Leicester Comedy Festival, as I mentioned last week. As the festival is now over there has just been tidying, sorting and collecting, work to be done… and one of the weirdest jobs has been to fold the large banners that have been around Leicester over the last few weeks. Here are some pictures as proof of the mission. They were huge, but we made a system of folding and even made it into a game… the life of a student ay? 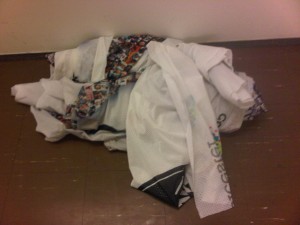 A bundle of mess 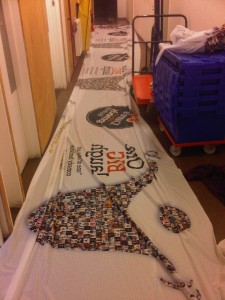 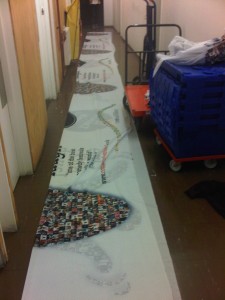 On the way to being folded 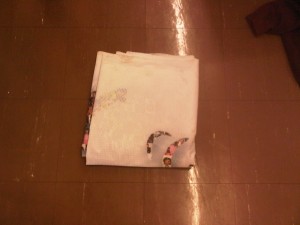 We also had Pancake Day this week that involved me sitting around while my friends made pancakes… perfect for me as I am useless at making at flipping them. My house, for some reason, have pancakes often and so this was the time to put all that practice to use, especially when it comes to topping the pancakes. We produced some interesting mixtures that all worked out well and tasted pretty good all in all. 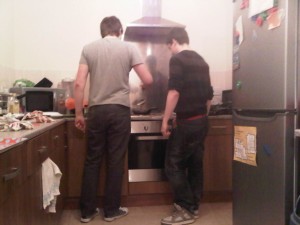 I like this as it looks like Paul is teaching Max about pancakes, and Max is paying careful attention

After the pancakes had been consumed we headed to the hardest pub quiz we have been to (with the quizmaster announcing that it was possibly the lowest high score ever), and contemplated the time we wasted on a quiz when we could have been making more pancakes.

Another week of food, quizzes and random activities then for me!

I’m sorry this post has not been about much in particular, and instead about a few events of the week… next week will be different as I have an essay due soon!

One response to “Folding Banners and Flipping Pancakes”