The Sword in the Hoard

Yesterday I attended a guest lecture organised by the Medieval Research Centre titled “The Sword in the Hoard”. Dr. Helen Geake, of Time Team fame, delivered a one hour presentation on the significance of the swords found in the Staffordshire Hoard. I was also joined by fellow blogger Richard.

In her presentation, Dr. Geake narrated the findings of the site, which was discovered in July 2009. The items in the hoard date to the late 7th Century, though some are possibly older. Over 60% of the items found are weapons or other military items. Many sword or seax (dagger) hilts and around 90 pommels have been found, leading some to suggest that this might have been a blacksmith’s store, plunder from a battle, or tribute from defeated kingdoms.

A Sword Pommel fresh out of the ground.

Around 5KG of gold and 1.5KG of silver items were found in the hoard, showing the rich nature of what was buried in the field – the largest hoard of Anglo-Saxon gold ever found. Interestingly, according to geophysics (looking under the ground with complex radar) the hoard was unlikely to have been buried at first, but hidden above ground. The site itself was in the middle of nowhere in what used to be wild ground or woodland. 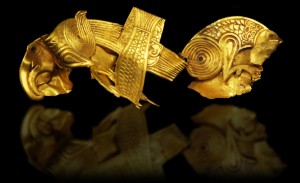 Gold Fish and 2 Eagles, possibly from a shield.

Staffordshire in the 7th Century was in the kingdom of Mercia, with the “Welsh” on its Western borders, and the more dominant kingdom of Northumbria to the North.  The hoard was possibly left (or lost?) by people travelling the old Roman road Watling Street, which is only 100m away. Unfortunately there wasn’t time for Q+A, but everyone was afterwards invited to a popular local pub, the Marquis of Wellington. 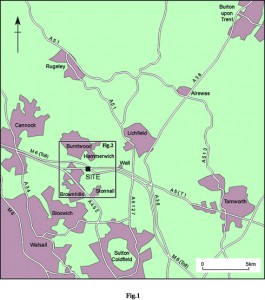 Position of the Site near the A5 and M6 toll.

This is the 3rd such history lecture I have attended this year, the others being about The English Castle by Dr. John Goodall, and Anglo-Saxon queenship, and I would highly recommend getting involved with them if you come to Leicester! I didn’t go to any in my 1st or 2nd years and now regret it! It adds so much to your academic experience – make the most of it!

One response to “The Sword in the Hoard”