A (TV) Series of Unfortunate Events

Taken from Lemony Snicket’s childrens book series, I’m dedicating this blog to a popular pastime of Uni students, that of watching and discussing a favourite TV series.

As mentioned in my previous blog, last week I had my 2nd exam, the Special Subject document paper, which I think went fairly well. (The proof is in the pudding as they say though!). My Final one EVER is on Thursday morning…

In between revision however, as mentioned, I have been engrossed with watching the political fantasy drama Game of Thrones, and last night was the Series 2 finale. Based on George R. R. Martin’s “A Song of Ice and Fire“, the two seasons (10 episodes each) so far have each been based on one book, with series 3 planned for April 2013. The penultimate episode of Series 2 last week was brilliant (green explosion made my jaw drop, if you’ve seen it!), but without giving anything away the finale last night didn’t disappoint! The ending North of the Wall however, had strong overtones of another favourite series of mine – AMC’s The Walking Dead. 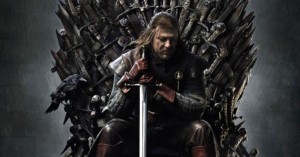 Sean Bean as Lord Eddard Stark in Game of Thrones

Based on Robert Kirkman, Tony Moore and Charlie Adlard’s comic of the same name, this series follows a group of survivors of a zombie apocalypse. Some may think zombies=horror, gore and little plot, but the series is far more intelligent than a simple hack-n-slash. Some episodes you could be forgiven thinking there was anything wrong with the world, as the tense human drama is only punctuated by the occasional “walker”. I watched Series 1 in my 2nd year with my housemate – we came back from a night out, watched the first 3 episodes until about 5AM, slept, then watched the final 3 the following afternoon!! Series 2 was slightly slower to begin with, until they opened the barn… Series 3 airs in October and will feature the prison and “The Governor” for those familiar with the comics. 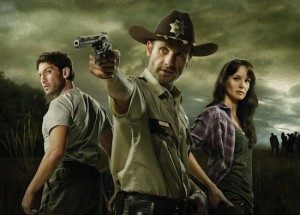 Main Characters Shane, Rick and Lori from The Walking Dead

The point is that a decent TV series can provide a welcome weekly distraction away from studies – I watched all 75 episodes of Battlestar Galactica in my first year. Not only that, but as a social event you can watch with housemates, or talk/gossip about between lectures or at lunch, a TV series is a great way to be “in the loop” with your friends. Returning to the blog title, not all your favourite characters may be likely to survive, and things are guaranteed to go wrong. Plot discussions, shock, speculations or rumours from the web are great topics. Can anyone really trust Petyr “Littlefinger” Baelish, for example? Is Shane Walsh a pragmatist in a bad situation, or just a vicious bully? Answers on a postcard.

Things like Lost or Homeland may be your thing, or perhaps the rivalry between Made in Chelsea and The Only Way is Essex. Or perhaps the latest series of The Apprentice. Whatever it is, TV seasons can provide a useful marker in your academic calendar, knowing you can watch it when you’ve written that last 500 words, finished that chapter or been to your last lecture of the week! Additionally, many are adapted from books or comics, so you can read the stories too!

I have to admit, I was a bit late to watch Game of Thrones (Who on earth was Tyrion Lannister??), but now I’ve watched it, I’m hooked! Only 10 months to go for the next series…

What’s Your favourite TV series? How many have you got into at Uni?