1. History Outside the Seminar Room

As a history student, you would expect me to have a passion for the past that goes past my studies – and you would be right. While I enjoy writing essays and assignments, I find it refreshing to visit historical sites and read up on past events without the pressure of coursework added to it.

This month I went on holiday to the historic island of Rhodes with my boyfriend, while a lot of the holiday was spent by the pool catching the sun (of course), we were also able to see some of the amazing sights and learn a little bit about the history of the island.

We went on an off-road excursion, enabling us to experience views that even the locals hadn’t seen – like this one! 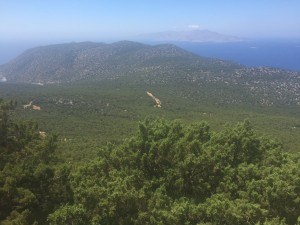 Our diver, who was born in Rhodes, was able to tell us about the history of a number of its villages and castles. For example, we saw the castle of Monolithos, which was built upon a 236 metre rock! Unsurprisingly it was never conquered. 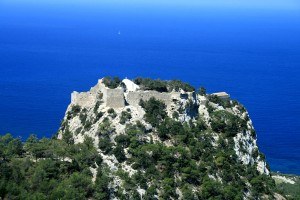 The castle of Monolithos

We had a great holiday, despite slight worries about Greece crashing out of the Euro and even got a little bit tanned – although it was only a week so not too much. It was interesting talking to the Greek people about the economic crisis – particularly for me as I have been studying an economic history module – and hearing different opinions and how it should be solved. I’m glad I don’t have to make that decision!

Not only did I visit some historic places in Rhodes, but I also did so in Leicester this month. Finally, after a long time of wanting to go, I went to the King Richard III Visitor Centre. I’m primarily interested in modern history, so before going I didn’t know much about Richard and his story.

I found out both about the King and how the team of historians, archeologists and genetics discovered and identified him! A lot of knowledge was gained that day, and I also felt an immense amount of pride that the University of Leicester was involved in such a momentous discovery.

I would advise anyone and everyone to go to the Visitor’s Centre, it’s a great day out, the food is lovely and you get to see the exact spot where the King was found! 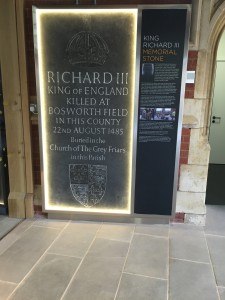 Richard’s Memorial Stone – an example of what you might find at the centre!

Hi, I'm Shannon and I'm in my final year of a History degree. In my spare time, I travel the country (and sometimes Europe!) to watch Arsenal play. I'll be blogging about both the academic and social sides of Leicester life and will hopefully show that balancing both is possible!