Going on holiday means relaxing away from the responsibilities of everyday life, but my recent trip to Kalkan in southern Turkey proved that continuing to learn is not incompatible with leisure. Whilst I spent a fair amount of the fortnight by the pool reading books (namely Paper Towns by John Green, Insurgent by Veronica Roth and The Book Thief by Markus Zusak), I also had the opportunity to visit the ancient ruined Lycian citadel of Tlos.

Upon first glance, the ruins at Tlos were extraordinary and well preserved; furthermore, because I had never chosen to study Turkish history, I was bursting with a multitude of questions regarding what I saw. 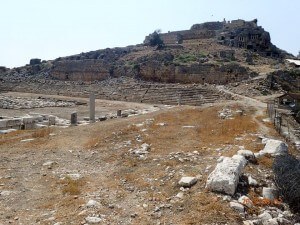 Our guide interestingly taught us that the site was one of the key Lycian religious cities where settlement began more than four thousand years ago. During its time, it has been inhabited by Romans, Byzantines and Ottoman Turks.

In the ruins, we could clearly see many tombs cut into the side of the hill; on one of these, the hero Bellerophon was pictured riding the famous winged horse, Pegasus. Although I had heard about Pegasus, I didn’t know much about the legend’s origination so this was fascinating to see. 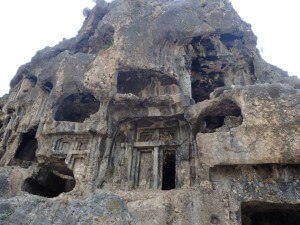 As well as the main structure, further remains of buildings could be found at the site, along with an agora (a public open space used for assemblies in Ancient Greece), a Roman-era amphitheatre, baths, and the remains of a Byzantine church. For a history student, so much visual evidence of various settlements was extremely exciting because it differed hugely to merely reading about it in library books (which obviously is still rewarding!). 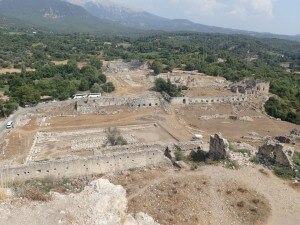 Although I perhaps didn’t learn as much as I would have done whilst studying in the David Wilson Library for an exam, my brief visit to Tlos was still rewarding and interesting. After seeing the ruins in person, I am encouraged to read more about Turkey’s ancient cities and also seize any opportunity to study the area comprehensively if I ever have the chance.