So, after a busy couple of weeks, I’ve just moved into my third (and final) student house. Whilst it’s a little bit sad that this is my last year in Leicester, my housemates and I are excited to be living in such a cute little property; it’s situated in the Clarendon Park area, only a five minute walk from the Uni, and very close to lots of other students!

If I’m totally honest, I was a tad disappointed with my room when I drew it out of a hat (it’s only fair) because it’s far smaller than my previous one. After a worried trip to B&M with the aim of finding a unit to shelve my candles and photo frames, I was slightly more relieved- I found one for only £15. Now that I’ve actually decorated the room, however, I’m really happy that it resembles ‘me’.

Here is my room from the entrance: 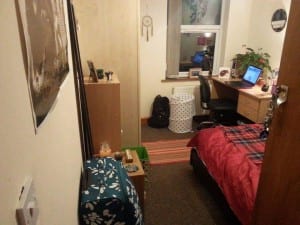 Now, I don’t have a ‘before’ picture, but hopefully you can see the visual effect that various items like rugs, dream-catchers and blankets have had. 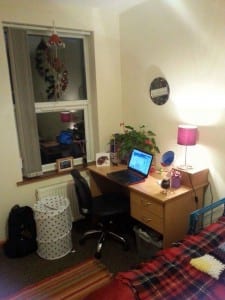 In this above picture, you can see my favourite hanging mobile on the window; I personally like the view from the exterior almost as much as the interior with it there! Also, I think my plant and lamp brighten up the place quite a lot. I was initially worried about having a plant because sometimes I feel like I can’t even look after myself(!), but this very special plant has survived on a diet of tea and lemonade leftovers- not that I’d recommend this treatment…

And below is the place I spend the majority of my time… working, of course. 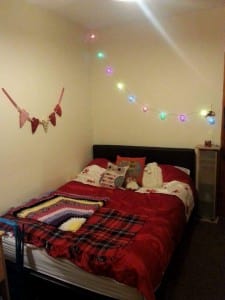 The fairy lights were only £6 from Tiger, which is quickly becoming my new favourite store. I’m also a fan of my crochet blanket which I got from a vintage fair in Milton Keynes; Leicester has a lot of vintage fairs so if you fancy one, you could keep an eye out for events on Facebook.

And the last view, featuring Pascal from Tangled. 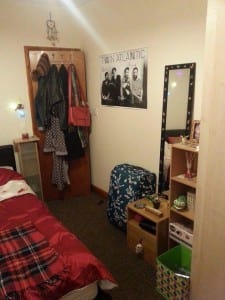 I’ve found over-door hooks to be a handy investment whether you’re in halls or a house; they mean you’re not marking the walls, and you’re saving valuable wardrobe space (these ones are from the Range). The shelving unit to the right of the photo is the one from B&M I previously mentioned, and I use it to put all my VERY important things on…

And lastly, can you tell I’m a fan of Twin Atlantic? I picked this poster up at a gig for just £2, and it covers the yellow mark on the wall. Genius, right?