If you haven’t already read Shannon’s post about what the HeForShe solidarity movement is about, have a read here.

This post is slightly different because I worked on day two of Leicester’s campaign, which actually included visitors from the UN itself. They were greeted by a huge crowd of excited faces outside the Fielding Johnson Building. 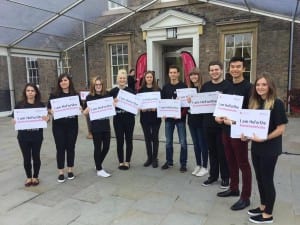 The first day of the campaign had been about spreading awareness of HeForShe as a movement, but today the immense support was recognised through high attendance at the launch event in the Peter Williams Theatre.

The welcome speeches from the President and Vice-Chancellor were engaging and inspiring as they talked about how Leicester University is just one of ten universities worldwide to be part of the IMPACT 10x10x10 campaign and how it aims to continue promoting gender equality. I found it interesting that only 27% of the Physics department are female, for example, which is quite a minority.

One of the highlights for me was when Dr Kaitlynn Mendes from the Department of Media and Communications conducted a short presentation about Feminism in the Media and why it matters. This was interesting because it showed the audience how we’ve developed our attitudes towards gender and how we have been influenced by media to think a certain way.

Another interesting point was Union President, Rachel Holland’s ideas about actively involving societies (especially sports) in the fight towards gender equality. She suggested that ‘lad culture’ is allowed to grow commonly but it only takes one person to challenge a traditional sexist view to make others think differently too.

Overall, I’m thrilled to have been part of the #LeicesterHeForShe launch event and couldn’t resist writing another post about it. Gender equality is an important issue because women deserve to have the same opportunities and public opinion regarding success and promotion as men do, whether in the workplace or an academic environment.