Most of you will have, in some capacity or another, heard about the United Nation’s HeForShe solidarity movement, which encourages men to engage with issues of gender equality and stand for women’s rights. Some of you may not know, however, that the University of Leicester is one of ten partner universities from across the world who are working with the UN.

I, for one, am incredibly proud of the University for getting involved with this initiative and am sure that will bring positive change! I would definitely consider myself a feminist, and contrary to popular belief it doesn’t mean that I hate all men, it means that I want people, however they identify themselves to be treated equally. For example, I want all people to be given equal opportunity, within education and employment.

Anyway, before I go off course and go on and on about my views, the point of this post is really to show the support that the HeForShe movement has had on campus and to try and encourage as many people as  possible to get involved. Yesterday, I worked on Freshers Fair trying to get people interested in the cause, and the response was overwhelming! Here are some photos from the day: 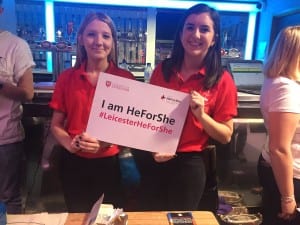 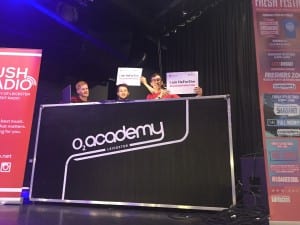 Here are the LUSH Radio boys declaring that they are HeForShe. 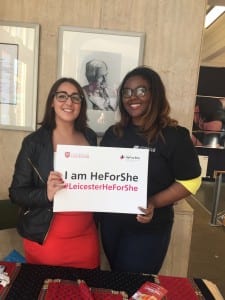 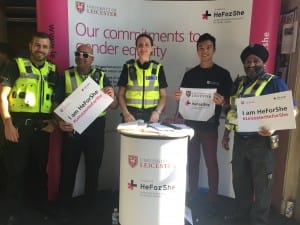 Even the Campus Cops got involved!

As you can see, we got lots of support across the whole University. Another aim of the day was to get as many ‘commitments’ signed as possible. The #LeicesterHeForShe commitment is for both males and females to sign themselves up to the cause by committing to either stand up for women’s rights, or to encourage men to do so. Again, we had overwhelming support and actually ended up running out of commitment forms – so it was a pretty successful day.

If, after reading this, you are interested in the cause and wish to sign the Leicester University commitment yourself, you can do so here. If you’re not yet a member of the University, don’t worry, you can find out more about the movement in general at the HeForShe website.

I urge as many of you as possible to do this and help contribute to the fight against inequality today!

Hi, I'm Shannon and I'm in my final year of a History degree. In my spare time, I travel the country (and sometimes Europe!) to watch Arsenal play. I'll be blogging about both the academic and social sides of Leicester life and will hopefully show that balancing both is possible!